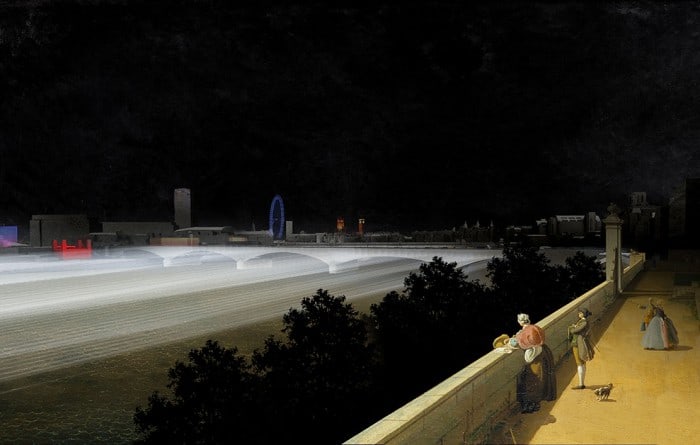 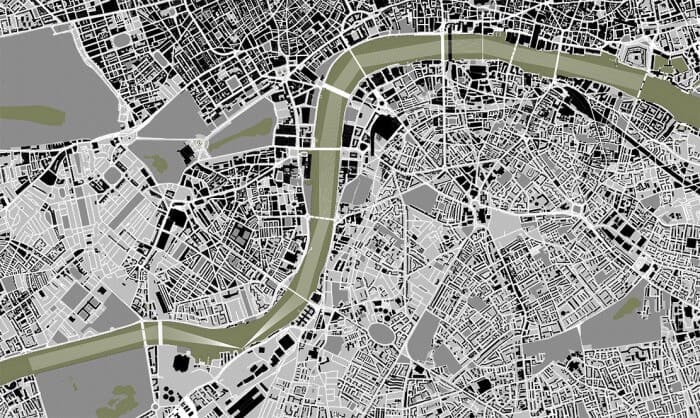 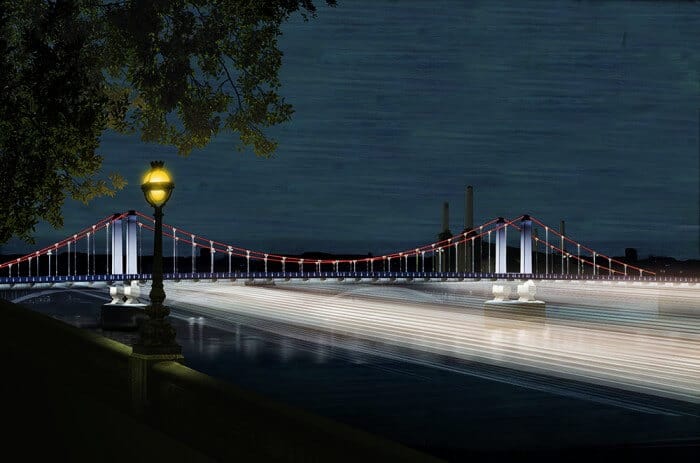 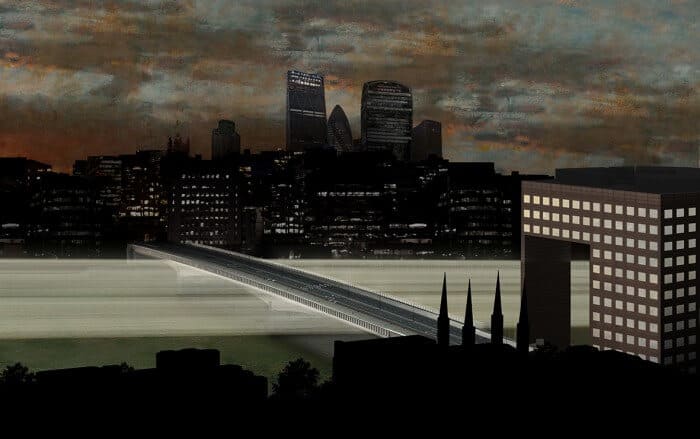 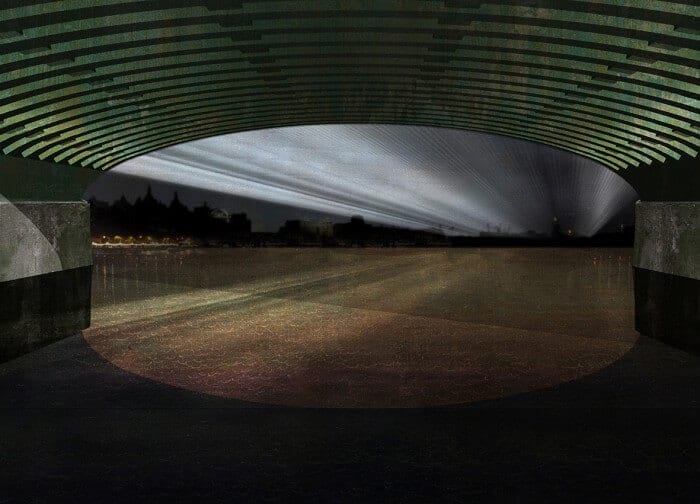 The Thames Nocturne is a proposal for the Illuminated River competition. Our team (Sam Jacob Studio and Simon Heijdens with Studio Dekka, Daisy Froud, Elliot Wood and Jackson Coles) was amongst 6 shortlisted teams along with Diller Scofidio + Renfro, David Adjaye and Amanda Levete) for at £20M installation across 17 central London bridges.

As night falls, the Thames Nocturne gradually appears in the atmosphere above the Thames. Its translucent form emerging into the dark space between the bridges. Its ethereal form ebbs and flows, intensities and patterns flow along the riverine void, pulsing through the fabric of the city itself.

The Thames Nocturne forms a ribbon of light connecting Chelsea to Wapping that uses light itself as a medium to create weaves of light forming a volume in space.

This volume is choreographed by live data read from the Thames itself creating an ethereal display that ebbs and flows in register with the river.

Within the river’s dark space, the Nocturne’s purity of light and geometry contrasts with the city’s endless variation.

The Nocturne is a simple gesture showing us the richness and complexity of London’s relationship to the River Thames. The Nocturne registers the natural and manmade flows that have been the constant characteristic of London and the Thames since its first settlement.

The bridges are revealed as diverse figures in the urban landscape, their individual character revealed though monochromatic light that subtly shifts, their architectural form seeming to wax and wane as the tide rises and falls.

Waterloo Bridge’s low-slung monumentality and its position on a bend of the river makes it an important London experience. Here, the drama of the Nocturnes geometry becomes visible. The volume and form of the light itself recording and amplifying the geometries of bridge, river and city.

The apparent simplicity of the lighting treatment becomes a subtle choreography unfolding over time to reveal the bridges in different ways, as if the architecture itself was gradually shifting with the rhythm of the rivers own flows.

Seen from the towers of the City, the Nocturne appears as a fluctuating ribbon of light. These pulses accentuate the connection between bridges and suddenly highlight the geography of the city with waves of light that flicker from Chelsea to Wapping.

The solid, simple form of London Bridge appears to slowly change as the level of the river changes. As if the solid form of the city was able to wax and wane as the tide rises and falls, registering subtle changes in the rivers own body in the manmade fabric of London itself.

In the darkness of these reaches the Nocturne assumes a more delicate form. Its own relationship to atmosphere becomes more apparent – as rain falls, the Nocturne begins to glitter. Each drop momentarily caught in the light, a frozen frame of atmospheric condition, cast as a plane through space. In mist, the edges of its planes become more distinct, even as the view becomes more obscured. As the weather changes so too does the appearance of the Nocturne, accentuating the rivers microclimate as an event in itself, an echo of the Thames Nocturnes painted by Whistler from which our project takes its name.

At Chelsea Bridge the river assumes a more intimate scale. The darkness of Battersea Park to one side, the emerging development of the power station to the other. It acts as a bridge between different qualities, and it itself is festooned as a decorative object with echoes of the Victoria Bridge that once occupied the site, ceremonially illuminated when Queen Victoria in London residence. The Nocturne resonates with a contemporary take on this symbolic role, the presence of the river and the city recorded and displayed in place of royalty.

The animation of the decorative lighting, driven by the flows of river and city give the bridges a new purpose. Infrastructure and ornament are fused with the delicate environmental spectacle of the Nocturne.

Between the entertainments of the South Bank and the spectacle of government, Westminster Bridges neo-Gothic structural intricacies are an important element in the urban scenography. The Nocturne works within this scene, adding drama accentuating the Gothic theatricality in a thoroughly contemporary way. The horizontally of the Nocturne works as a contrasting echo to Palace of Westminster’s perpendicularity.

Seen from a river cruise, the presence of the bridge is accentuated as an event horizon between distinct reaches of the river, the Nocturne floating above like an abstracted atmosphere, the space between is planes reading as translucent vectors of flow through the city.