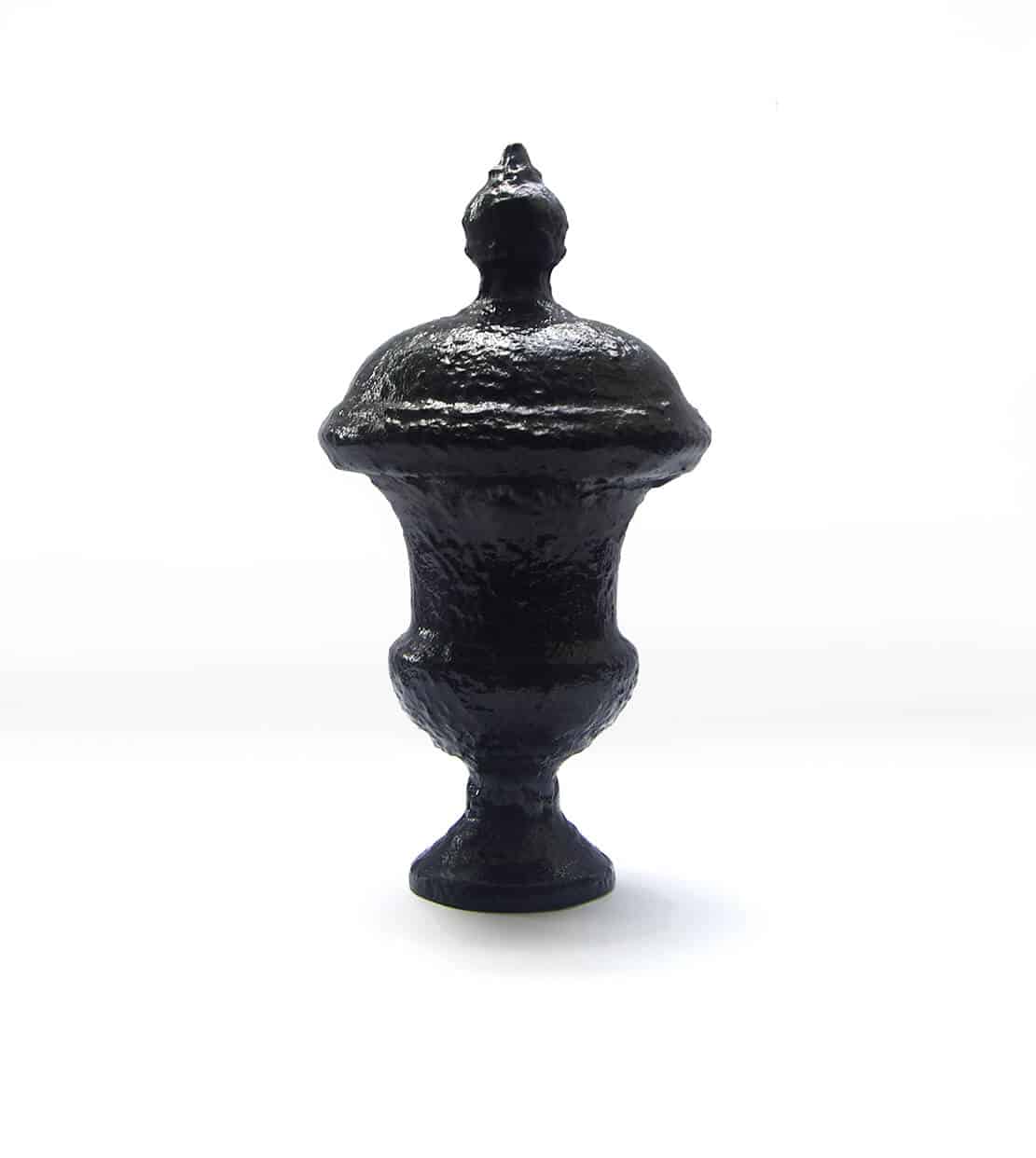 Lenin’s Urn is a tribute to the effect of history on objects. It is an object based on an existing Victorian railing finial found outside the house on Tavistock Place that Vladimir Ilyich Lenin once lived in. The finial – battered, repaired and repainted many times – has been 3D scanned, enlarged then CNC’d to produce a high tech rendition of a fragment of familiar London street scene.

Through this change in scale the familiar becomes stranger. We see the architectural figure of the urn – on which the railing finial was originally based – return to its ‘real’ size. Yet even as it becomes more real it enlarges the transformations of wear, repair and layer upon layer of repainting that, over the years have altered its original form.

On Tavistock Place there’s a stretch of Victorian terraced housing that is now (mostly) a string of hotels and B&B’s. You might wonder if any of those budget travellers, while trundling their suitcases up from Euston Station look up to see the blue plaque on no. 36.

It reads “Vladimir Ilyich Lenin 1870-1921, Founder of the USSR, Lived here in 1908”. Lenin stayed here at the beginning of his second period of exile from Russia. Tavistock Place was a convenient base for his research at the British Museum while writing ‘Materialism and Empirio-criticism’ (published 1909).

This part of Tavistock Place is a typical London terrace. Each house has a basement area to the street front. Around these are cast iron railings painted black gloss. Painted many times it seems. Each layer building up on the last, each lick of paint shrouding the metal form in another layer.

Over time – and who knows quite how much time – the decorative details of the the railings have been gradually blurred. What we see now are these strange abstractions of varying degrees, each urn displaying its history of bumps and repair, of coat after coat until they become distinct shapes developing their own character. These are objects created over time, pieces of urban fabric that, like tree rings, tell their own story of their presence in the city.

In their vagueness, in their sense of shrouded form we might feel some vague-shaped ghost of Lenin’s presence, somewhere down amongst their base coat. Talk about dialectical materialism, which, as Lenin explained in the very book he was writing during his stay at Tavistock Place:

“ … insists on the approximate relative character of every scientific theory of the structure of matter and its properties; it insists on the absence of absolute boundaries in nature, on the transformation of moving matter from one state into another, that from our point of view [may be] apparently irreconcilable with it, and so forth.”

This is the character Lenin’s Urn tries to capture. Specific vagueness, the precision and sloppiness that characterises the typical London street, and the ways in which time has washed over objects as if it were a raging torrent of water eroding its original form.

Each ancient fragment within Sir John Soane’s Museum draws an incomplete yet intriguing picture of the whole. They seem to be able to embody something significantly bigger than their size, inviting us to speculate, imagine and eventually form our own versions of what they are. These objects are almost short quotations from different places and different times, ready to be reused or even misused. Five participants will present work which responds to these ideas. Displayed within the historic interiors of the Museum, they offer a contemporary interpretation on how we could engage with the fragmentary.

The exhibition has been curated by Workshop for Potential Design.

Exhibition booklet available with texts by Vicky Richardson and Emma Mattei among others.