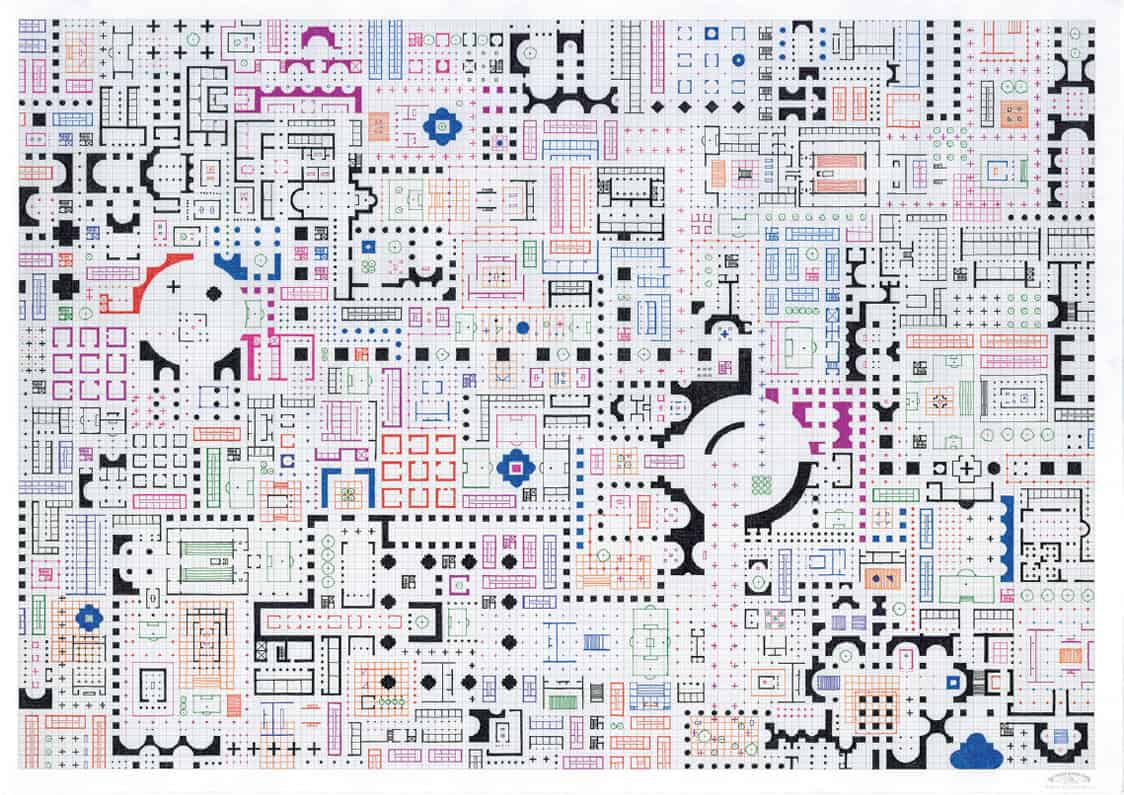 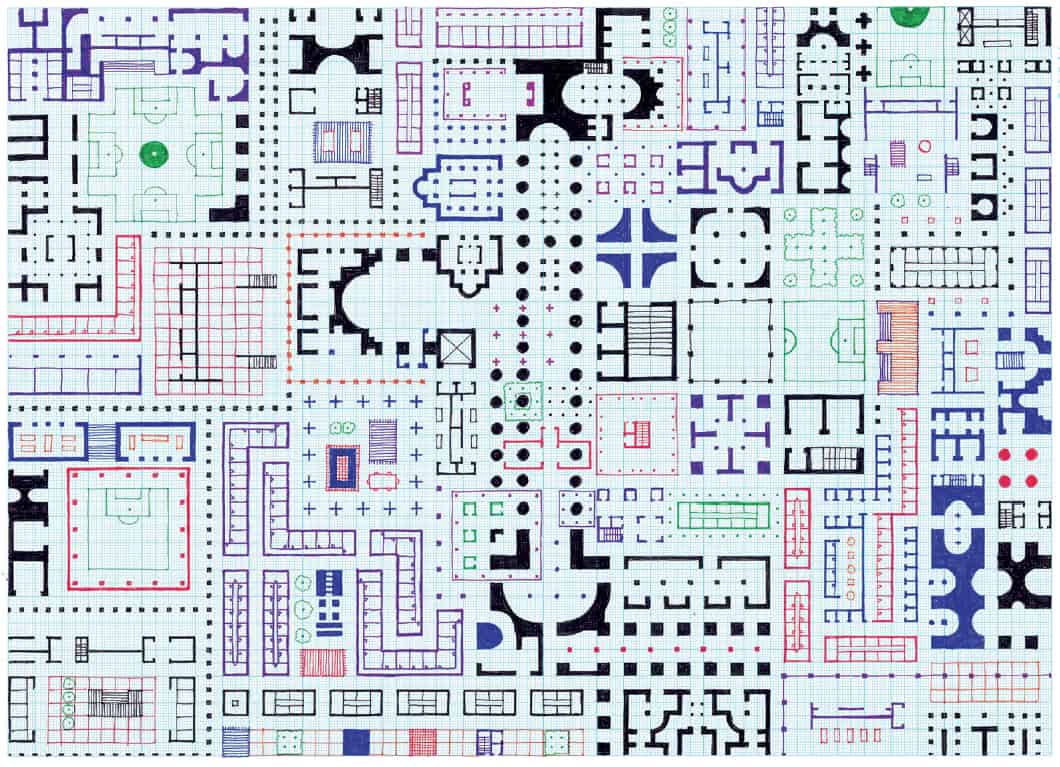 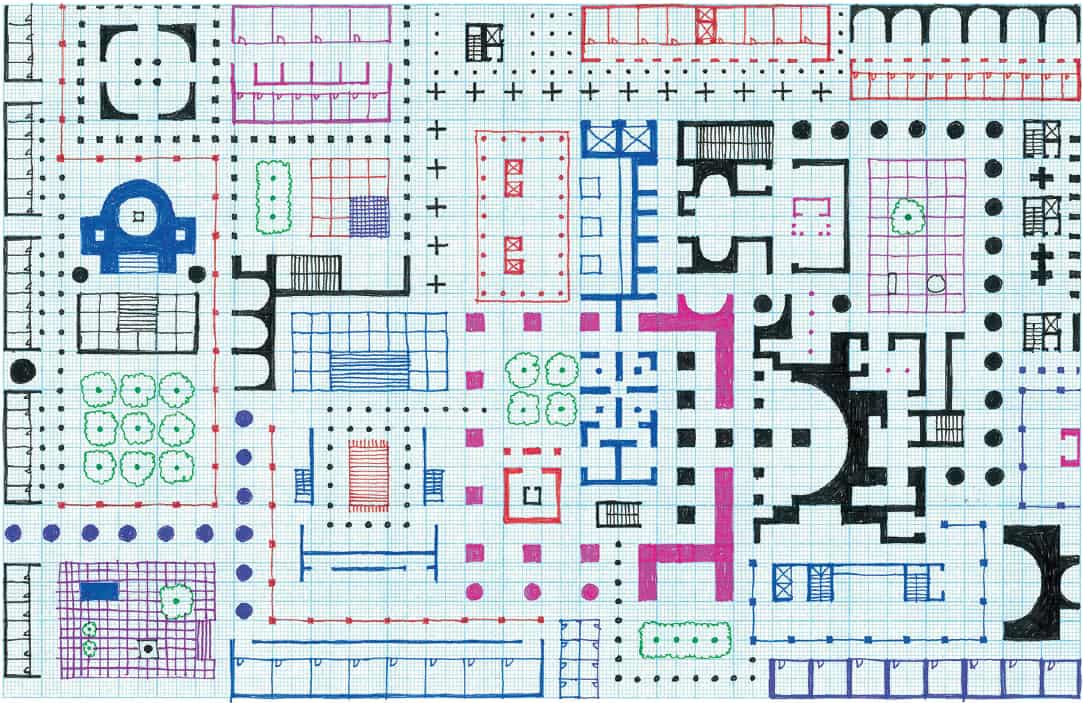 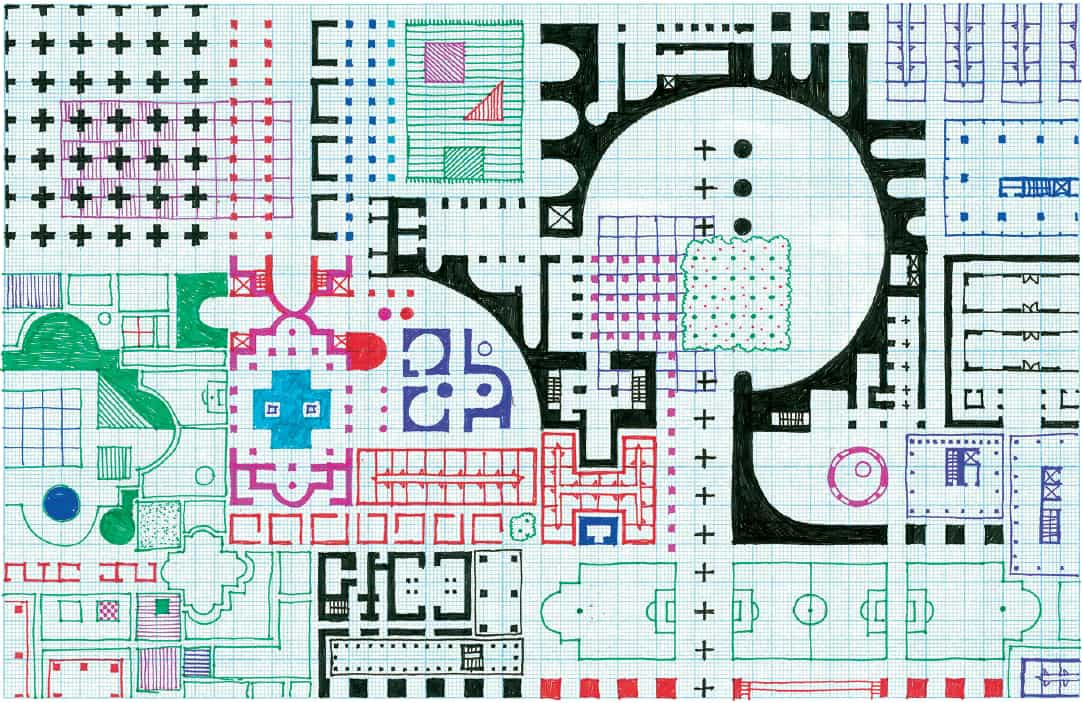 Empire of Ice Cream is a on ongoing series of drawings. Each is filled with fragments of architectural plans. These elements are sometimes grand and monumental. At others they are banal and generic. They seem drawn from diverse sources, some historic and others contemporary.  But they are always fragmented so that they create an architectural field that is complex ,hybrid and always shifting.

The drawings feature pieces of Greek Temples, fragments of football pitches, something Miesian, parts of a church, orchards, fountains, boring corridors, a chunk of Parliament, a Buzzcocks single cover, elements that are drawn half from memory that cover the page like an architectural stream of consciousness.

Sam Jacob started the series in 2011 as an invitation to participate to the second edition of San Rocco Magazine titled ‘The Even Covering of the Field’.

In their own description of the field, Jacob’s drawings explore an idea of space as a sprawl of fragments stretching to the horizon. They are drawings of contemporary space as an all-consuming territory, an inescapable terrain that encrusts the earth and assimilates everything – the densities of cities, the grandest of monuments, the banalities of everyday life, everything built and even what might be left of the wilderness. The limits of the field in these drawings are the white margins of the graph paper. The motifs that fill it seem to be fragments of architectural memories whose logics are in collapse, strangely choreographed and operating as a dream like architecture.

‘Every piece of architecture is a world. Each an empire within its own borders. But outside of these perfect islands of architecture the city they make up renders them fragments. We experience them as fragmented sequences of different worlds. And at the city itself remains in a constant state of construction and destruction.’

Empire of Ice Cream produces plans that will never be built, drawings that evolve according to their own patterns: A stream of consciousness and a mania of production.

They might be maps of fragmented empires, half remembered buildings, parts and fragments dissolving into one another, forming conglomerations and aggregations that breed but never settle. Felt tip pens trace their way across the graph paper leaving plans of enclaves and exclaves, borders and passageways, unified yet sprawling worlds where everything is exactly the same but always different.’