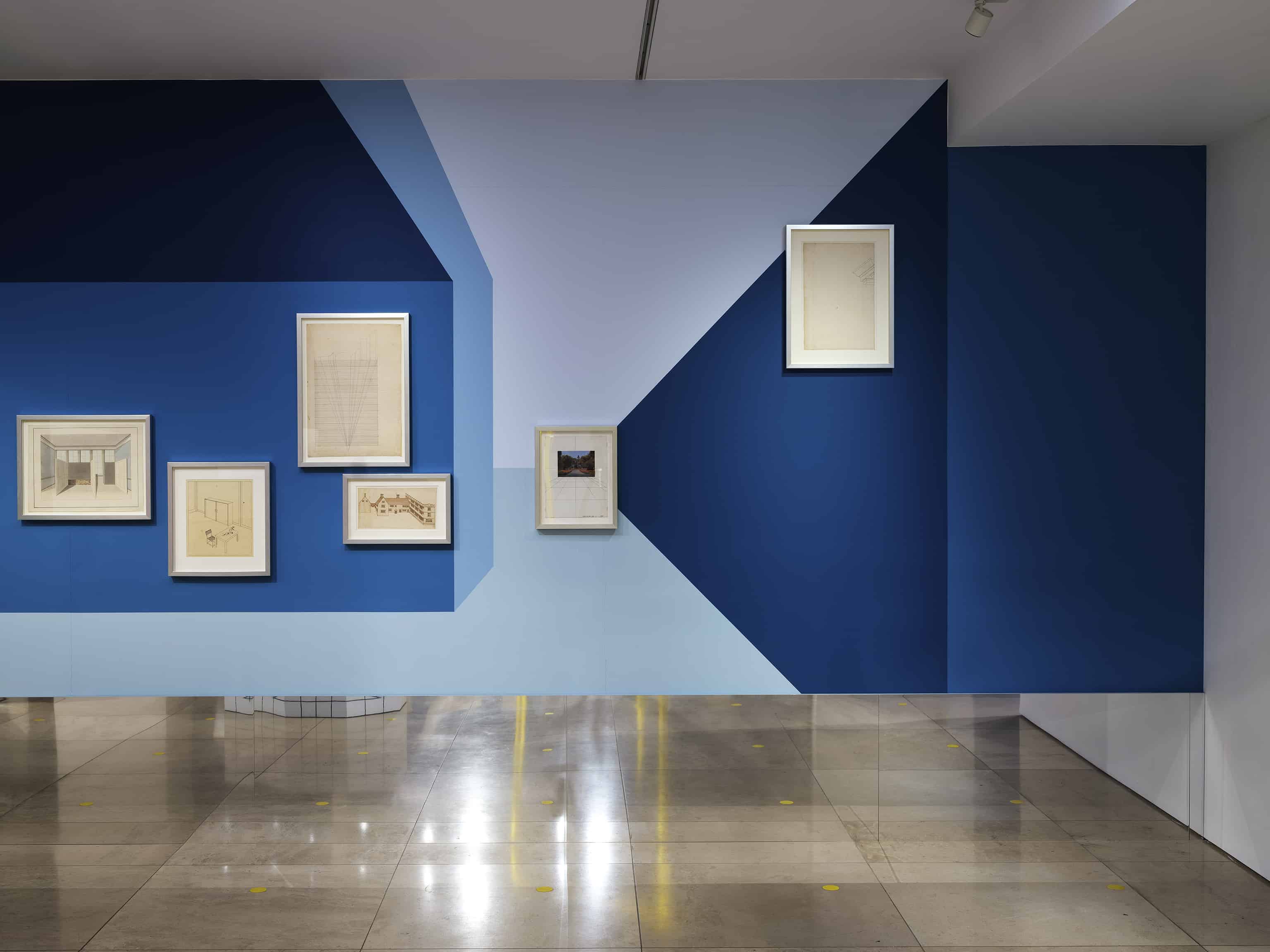 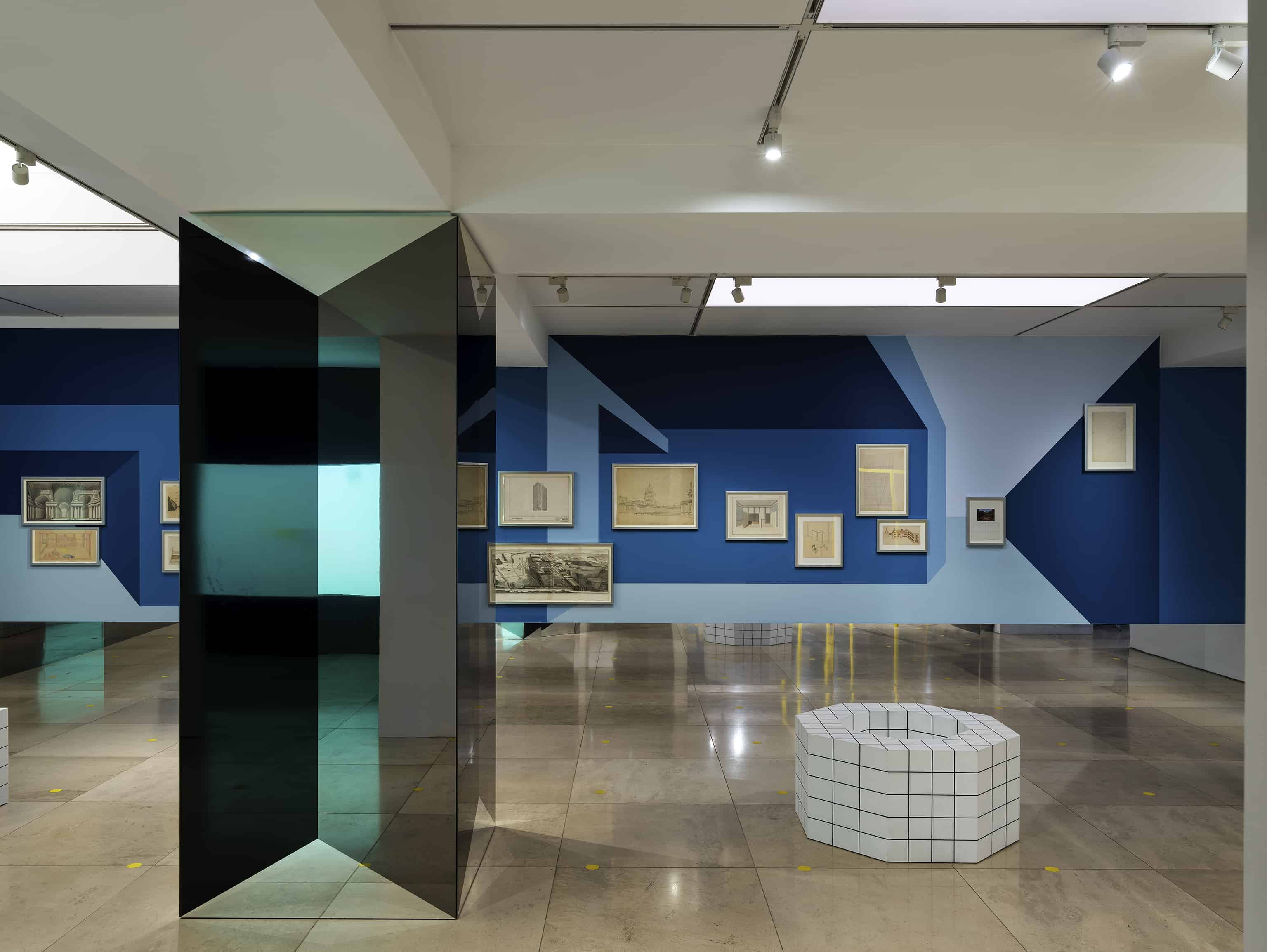 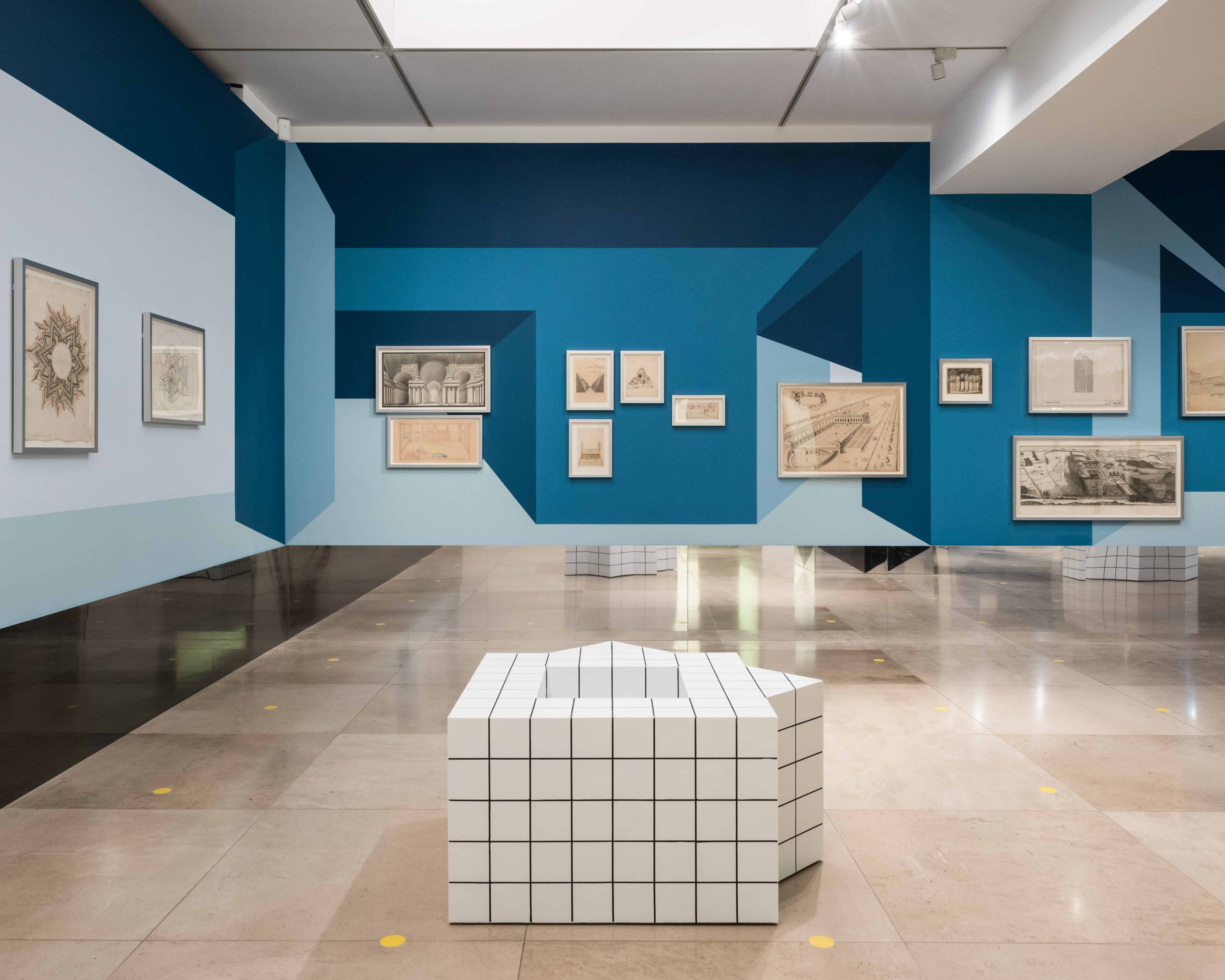 Disappear Here: On perspective and other kinds of space

The Architecture Gallery at RIBA, May – Nov 2018

Disappear Here is a show about the power of perspective to shape not only graphic space of representation and drawings but also its ability to transform the world around us. It features a selection of drawings by diverse architects and designers including Palladio, Superstudio and Boullee set within an installation that allows us to look at how a system of representation.

Speaking about the exhibition, Sam Jacob said:
“Since its invention in the 15th century perspective has been a fundamental tool in the way we imagine space and design architecture. But perspective is also a kind of tyranny too, forcing its own logic onto the worlds we create. This commission gave us the opportunity to explore how perspective has not only been used to illustrate the world but also how it creates and organises the world. This continues the studio’s longstanding interest in how ways of drawing shape the architecture we create. For Disappear Here we wanted to create a space where visitors can experience the essentially illusory nature of perspective, question its rules, and understand the power of the vanishing point to organise the world beyond the frame of the picture.”

Hovering between Illusion and truth, straddling art and science, perspective has become the ultimate quest for realistic depictions of a complex world. Since the Renaissance the use of linear perspective has been a constant in architectural writing and Illustration, employed as a tool to evoke Illusory architectural spaces.
Perspective manipulates, woos and distorts our visual perception. Paradoxically the complexity of its rigid geometrical constructs provide the most accessible and popular representation of a design in three dimensions. The drawings on show were selected from the RIBA’s vast collection and from Drawing Matter, each chosen for how they reveal the graphic construction of perspectival drawing. Highlights include John Smythson’s early 17th Century Jacobean designs to a colourful modern interior by Max Clendinning, Etienne-Louis Boullee’s intricately drawn neo-classical fantasy, alongside other original drawings by Andrea Palladio, Edwin Lutyens, Erno Goldfinger and William Talman.
Additional drawings on loan from Drawing Matter include modern works from the radical Italian architecture group Superstudio and industrial designer Raymond Loewy’s drawing of a space station capsule for NASA.

On display too are historic books on perspective including volumes by Sebastiano Serlio and Hans Vredeman de Vries that show how perspectival drawing was communicated and instructed.

Contemporary use of perspective is explored through an immersive digital ‘drawing’ developed by Sam Jacob with video game developer Shedworks. Surrounded by projections on three sides, objects – modelled on the architectural fragments illustrated in the books on display – spawn from a vanishing point and cascade towards the viewer in a way that both reinforces the axis of perspective while also destabilising their position in space. These digital models

As a spatial, immersive and generative experience, the piece explores perspective in a digital age and interrogates notions of space, infinity and vanishing points.
Disappear Here is not a history of perspective, although the displayed material, chosen by the studio, spans four hundred years, traversing style, politics and pictorial qualities, Instead they demonstrate the many guises in which perspective is applied by architects: from sketches and working drawings to topographical records; from technically exquisite exemplars to flawed realisations; from the early sixteenth-century writings of Sebastiano Serlio to the radical idealism of Superstudio. By placing this historical material within an unconventional contemporary space, the relationship between art, architecture and mathematics Is exposed and the artificial construct of perspective unravelled.

In doing so, the exhibition overstates and subverts conventional ideas of spatial representation, forcing us to reconsider not only how we define, depict and experience architectural schemes, but how we gauge our own wider reality in the world around us and how powerfully the logic of perspective has shaped the world around us – not just as a means of representation but as an organising principle.

Sam has made an editioned print now available from RIBA, that uses the same principle as the gallery hang – a neon screen printed perspectival space that arranges postcards of drawings by Palladio, Hawksmoor and Goldfinger. Proceeds from sales support the Architecture Gallery’s ongoing programme.

The Architecture Gallery at RIBA is open from 10am – 5pm Monday to Sunday and until 8pm every Tuesday. Free entrance. RIBA is at 66 Portland Place, London, W1B 1AD