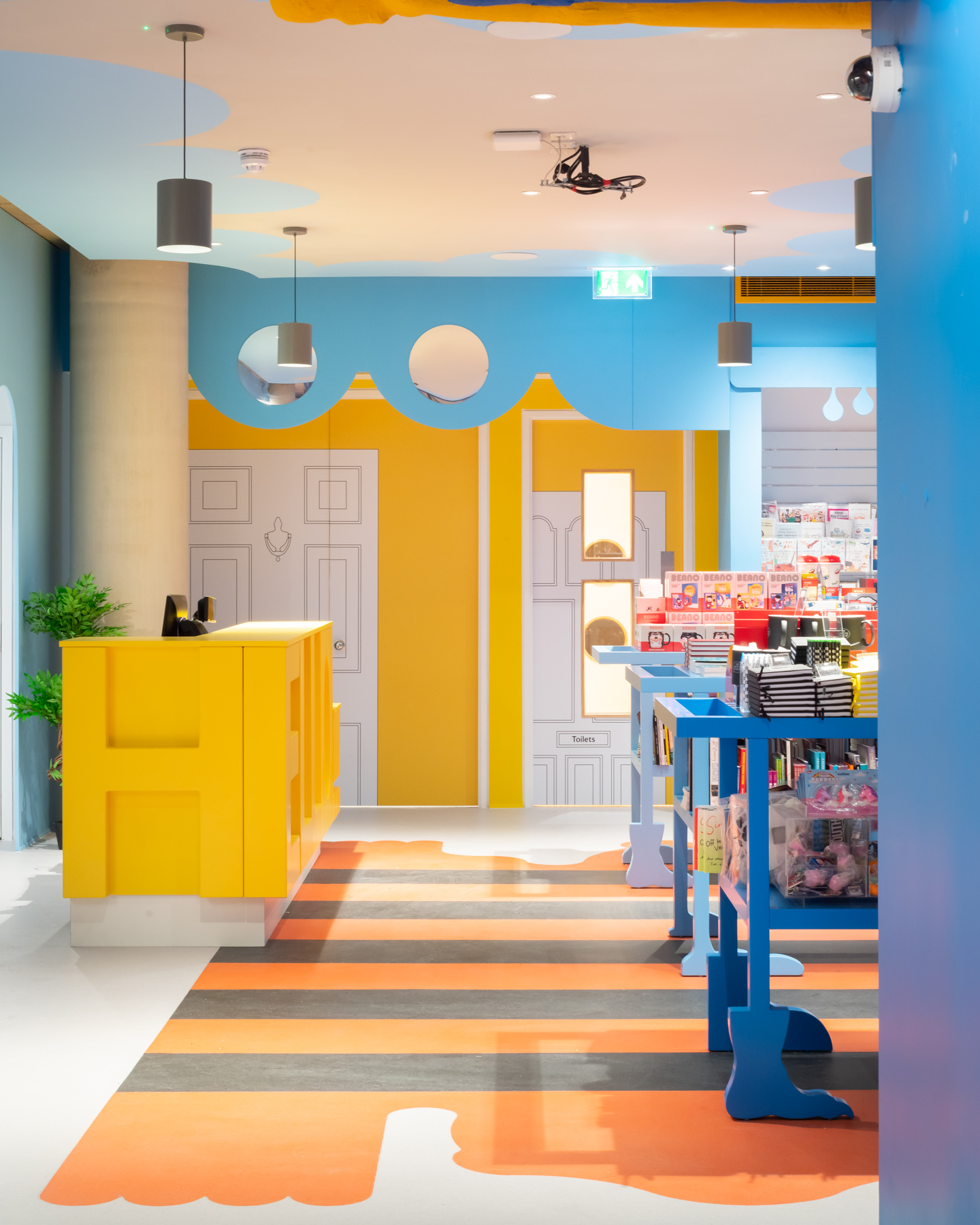 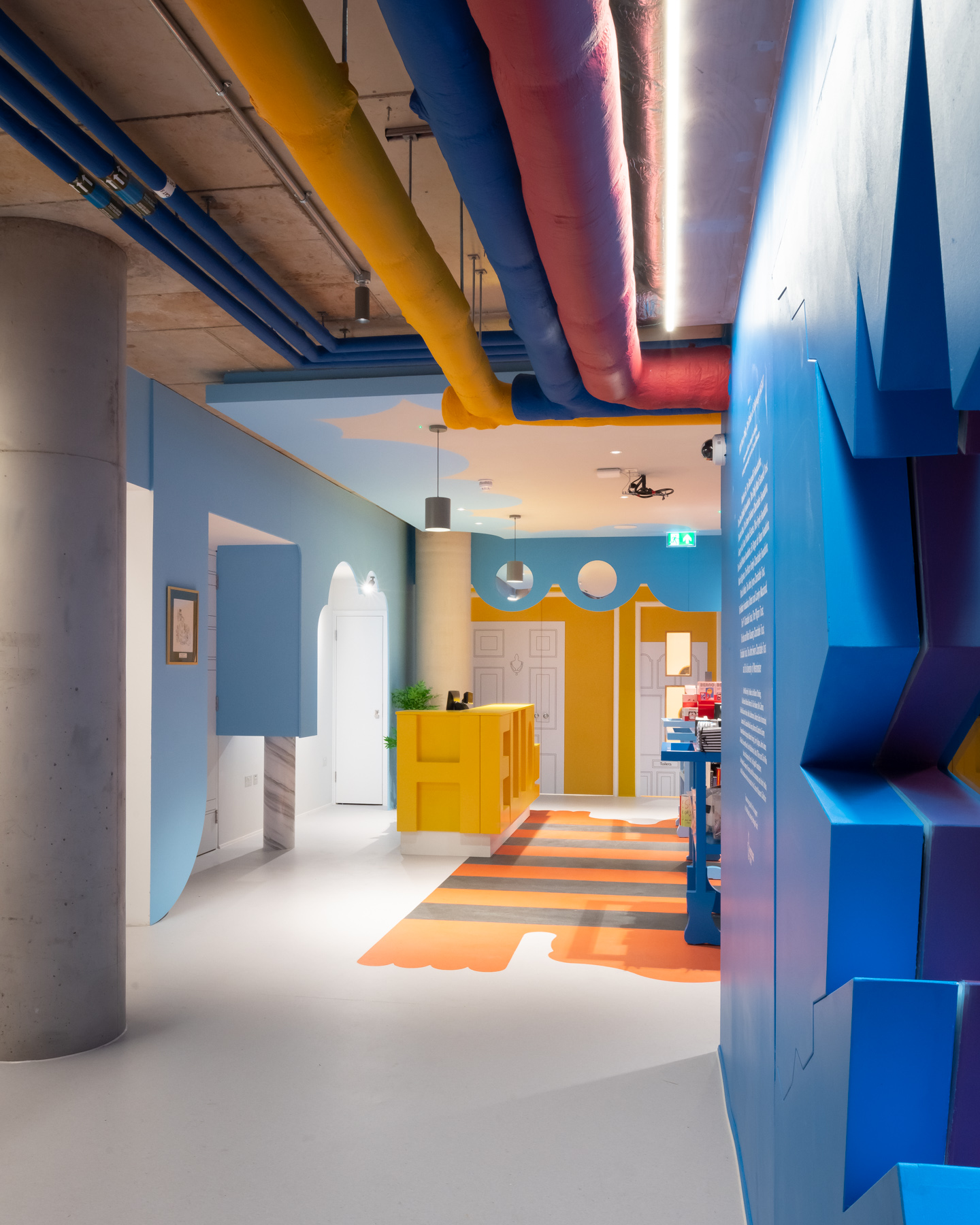 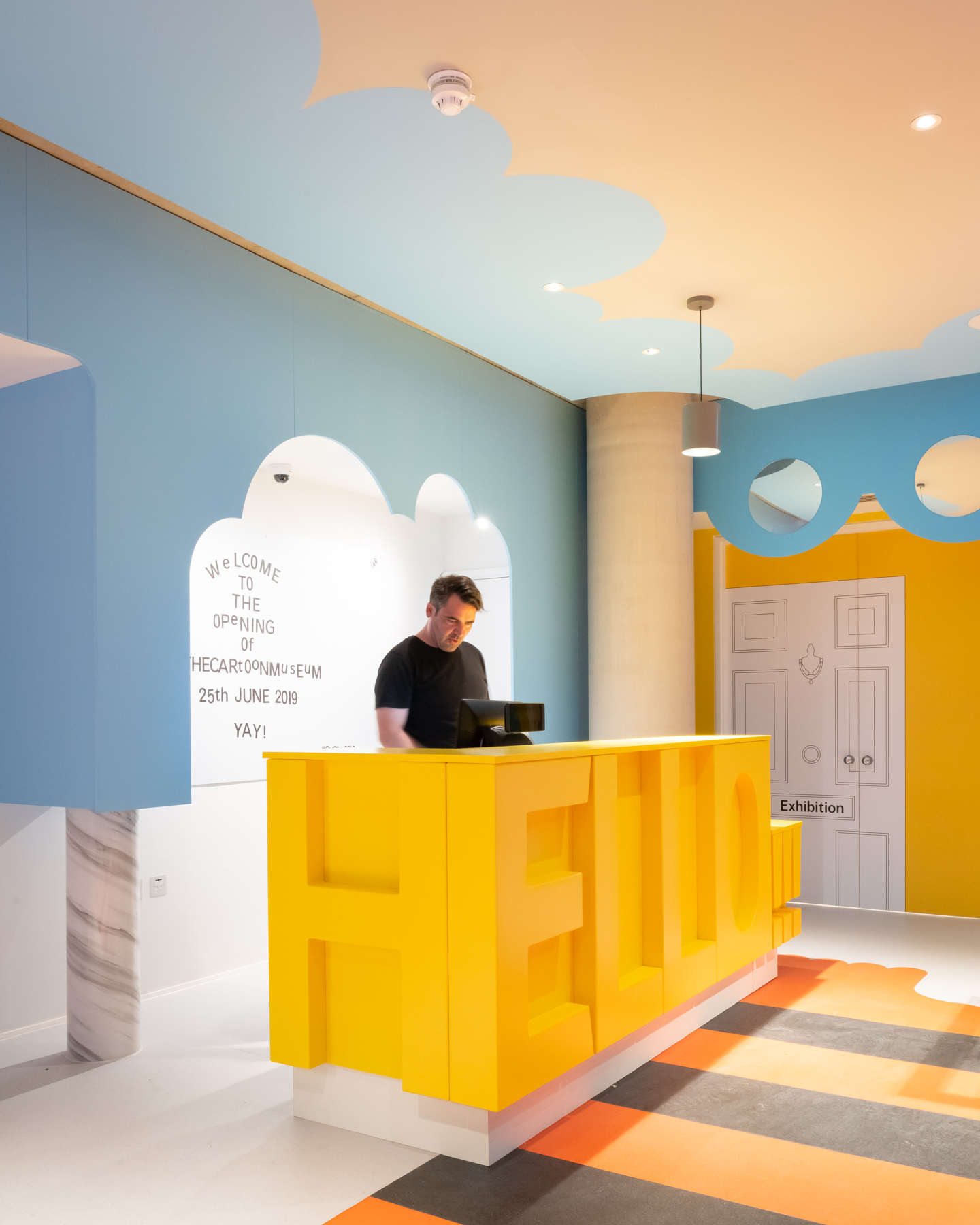 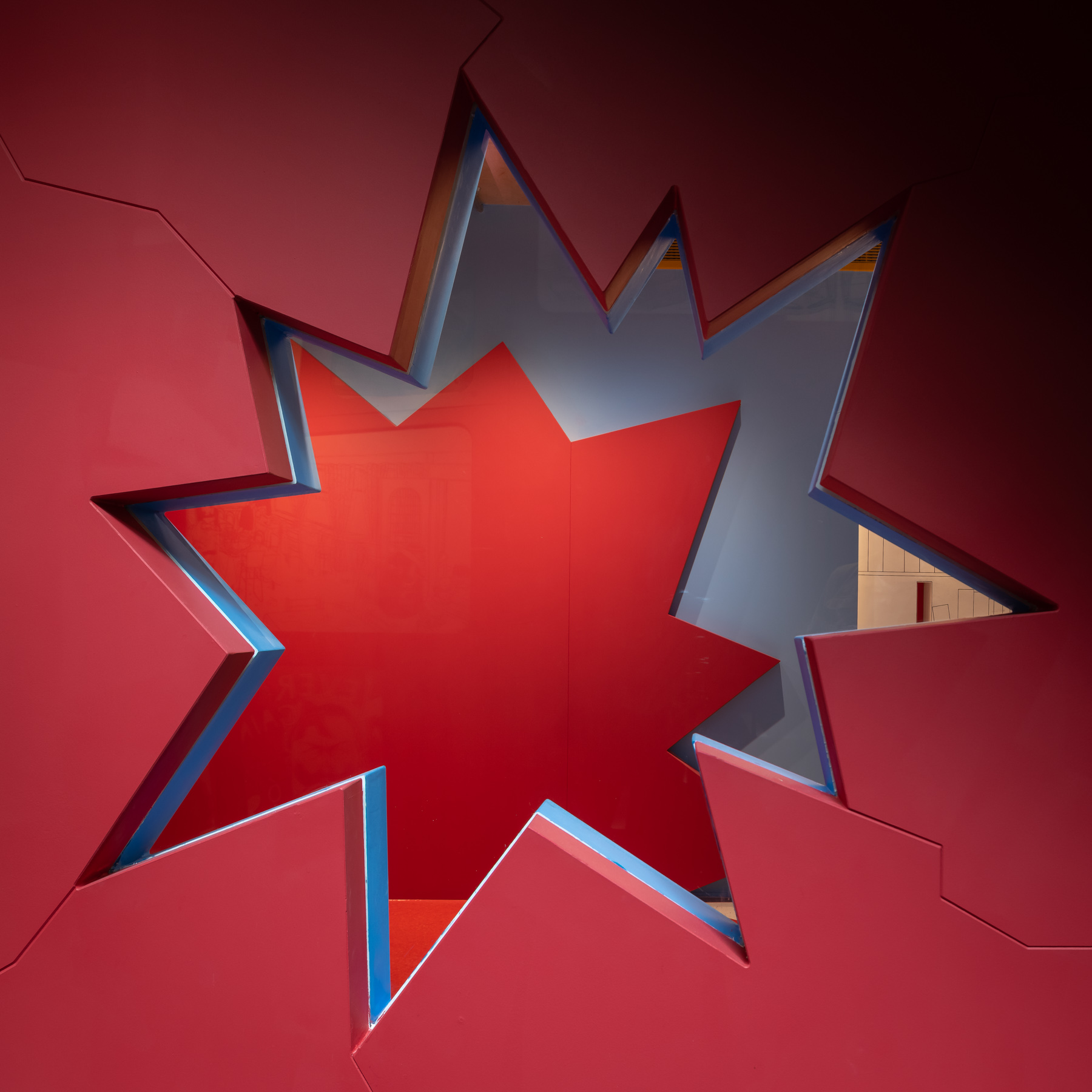 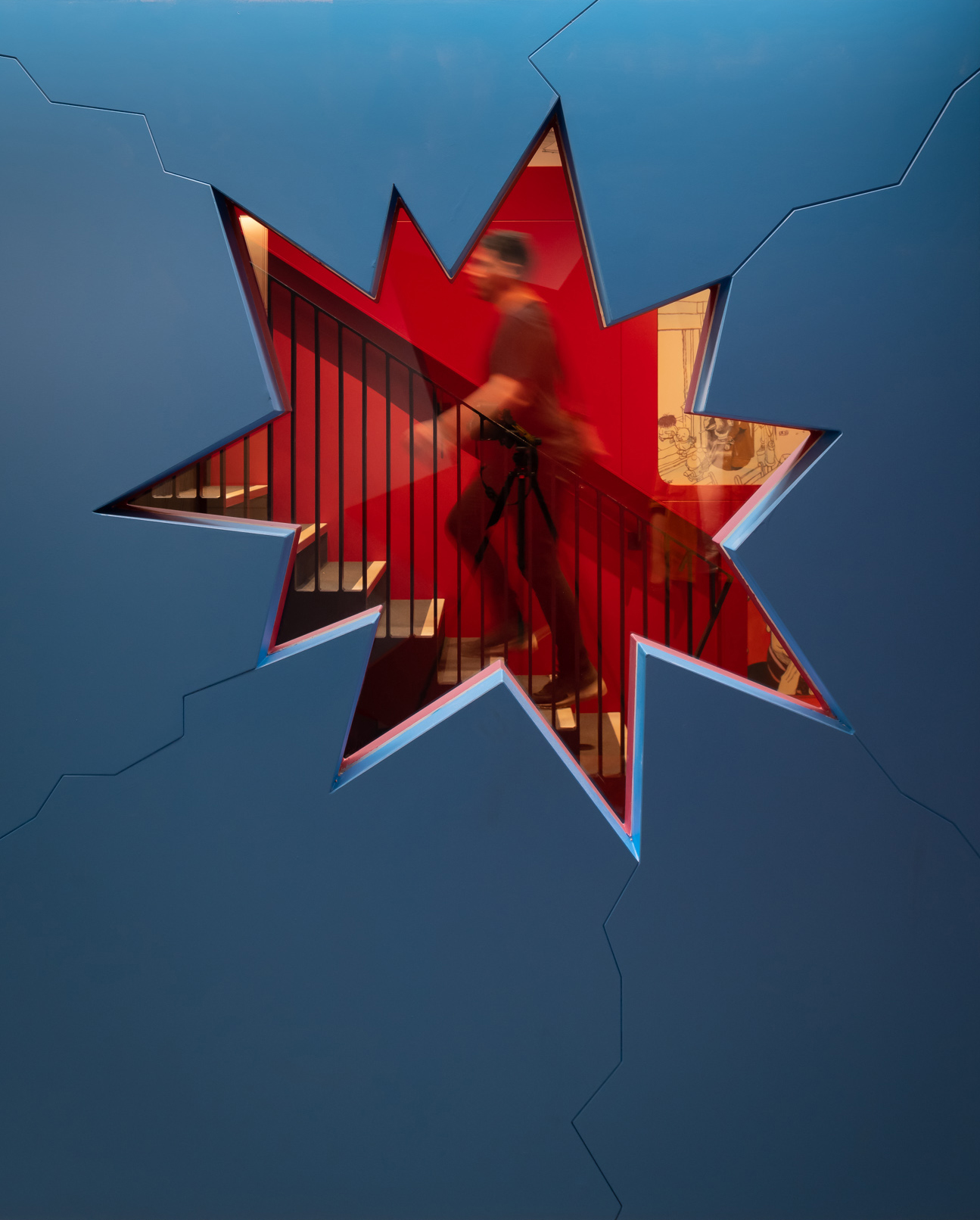 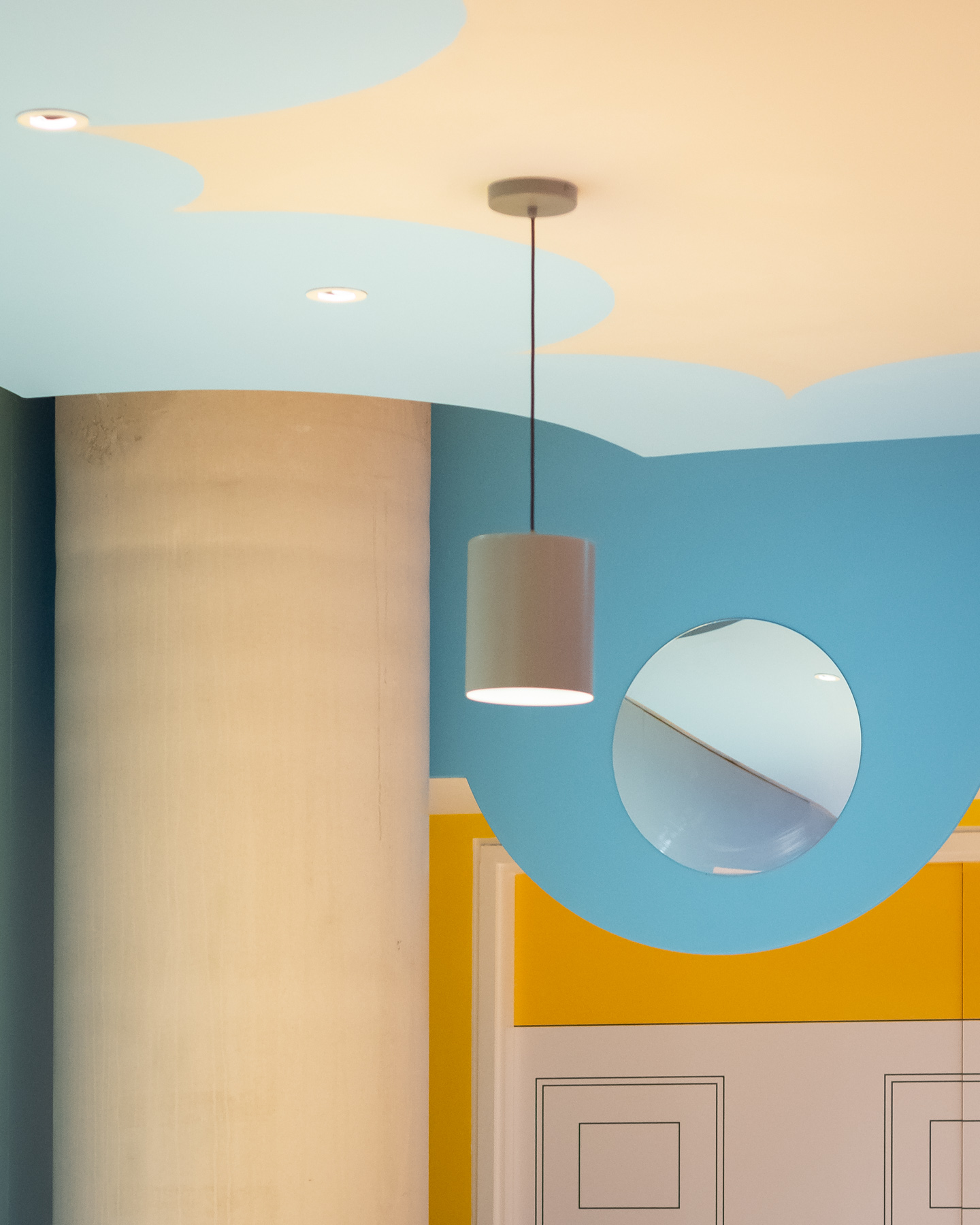 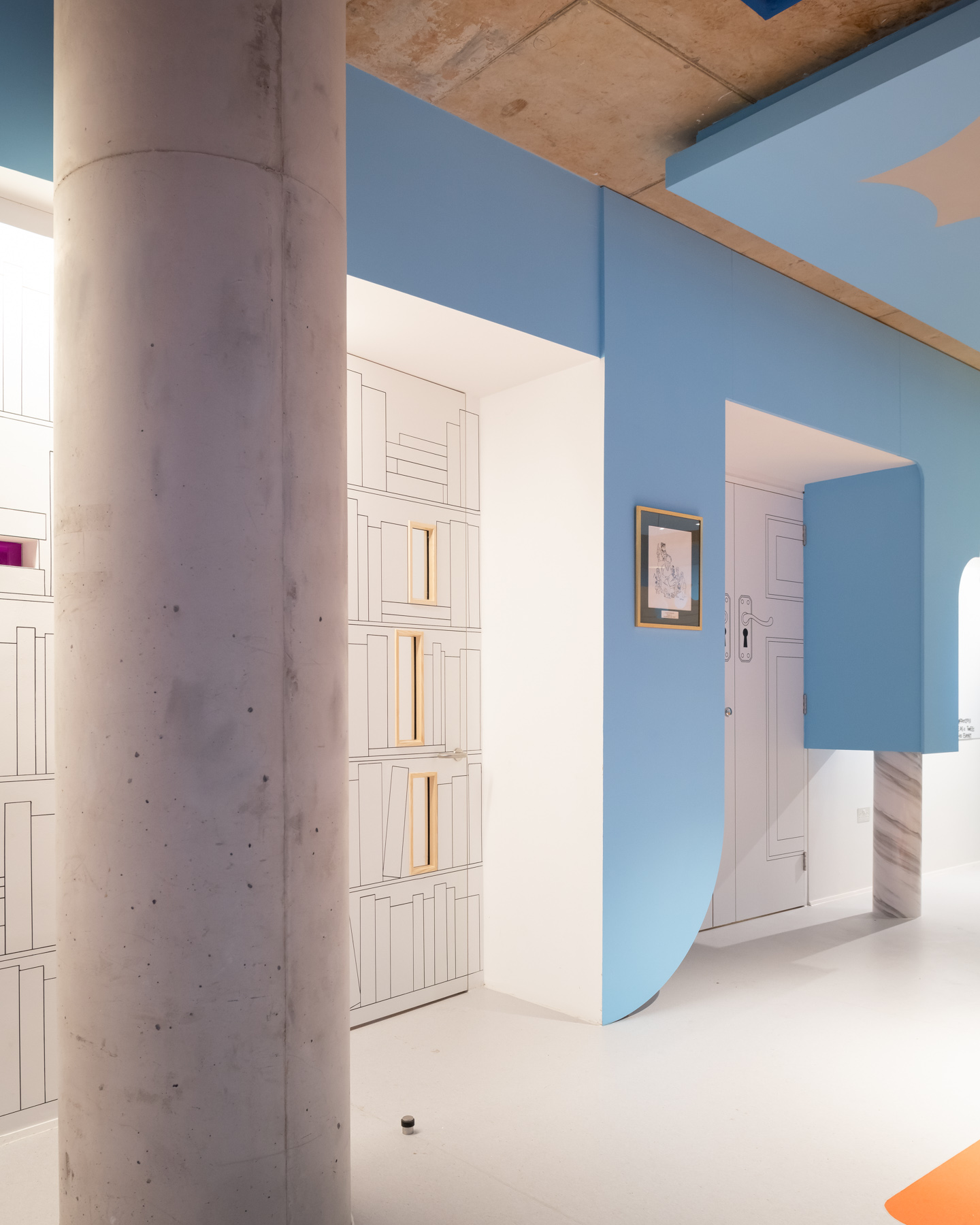 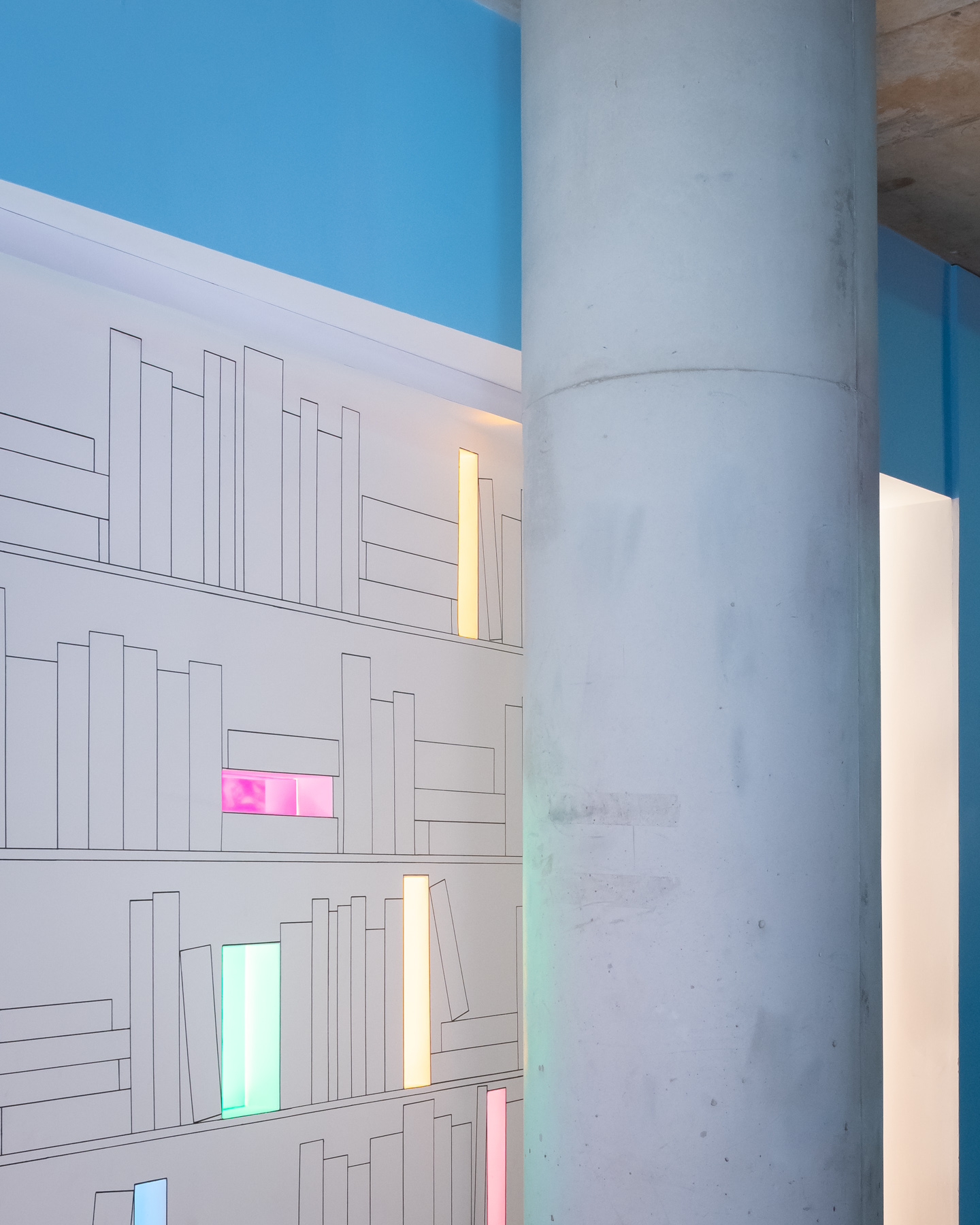 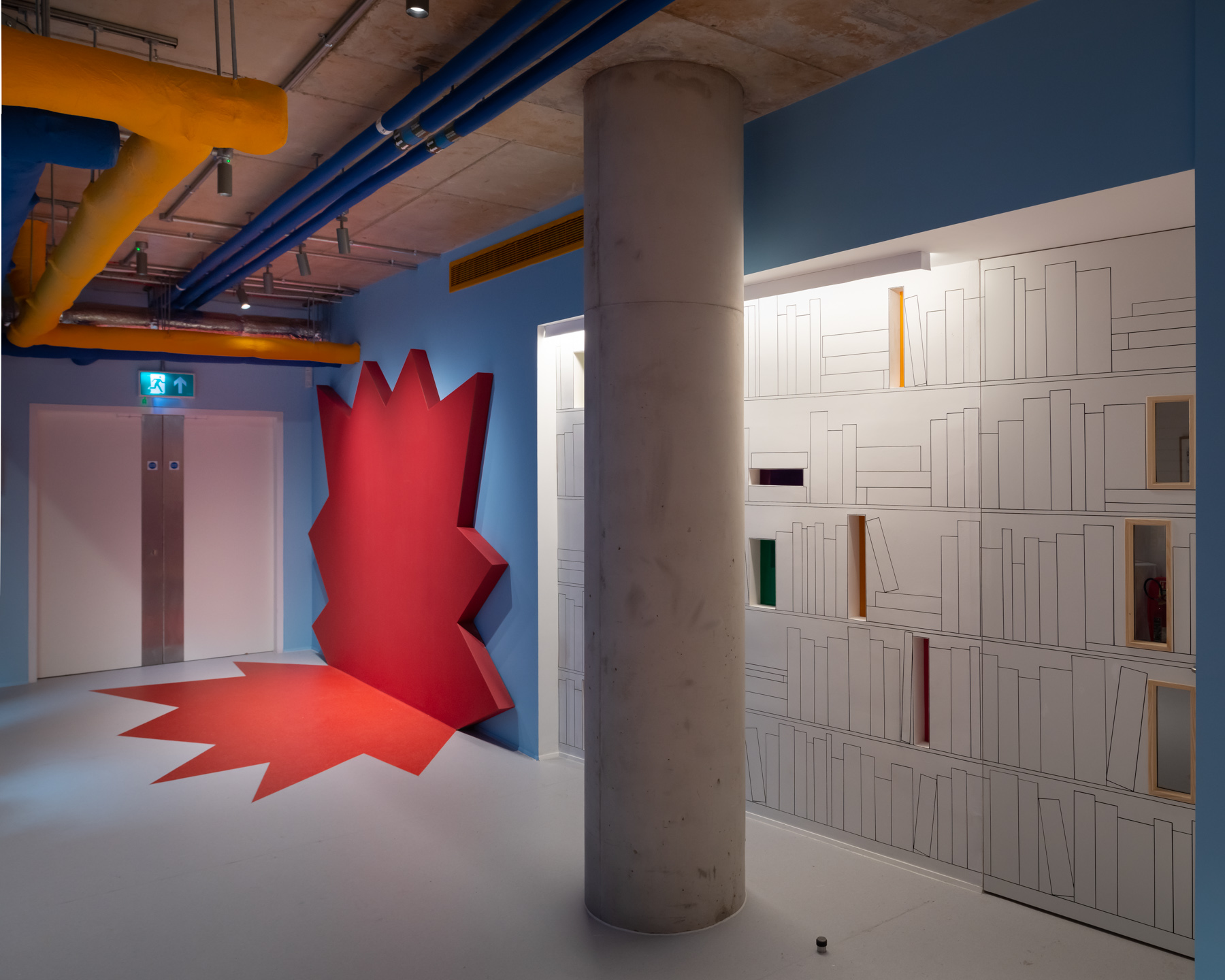 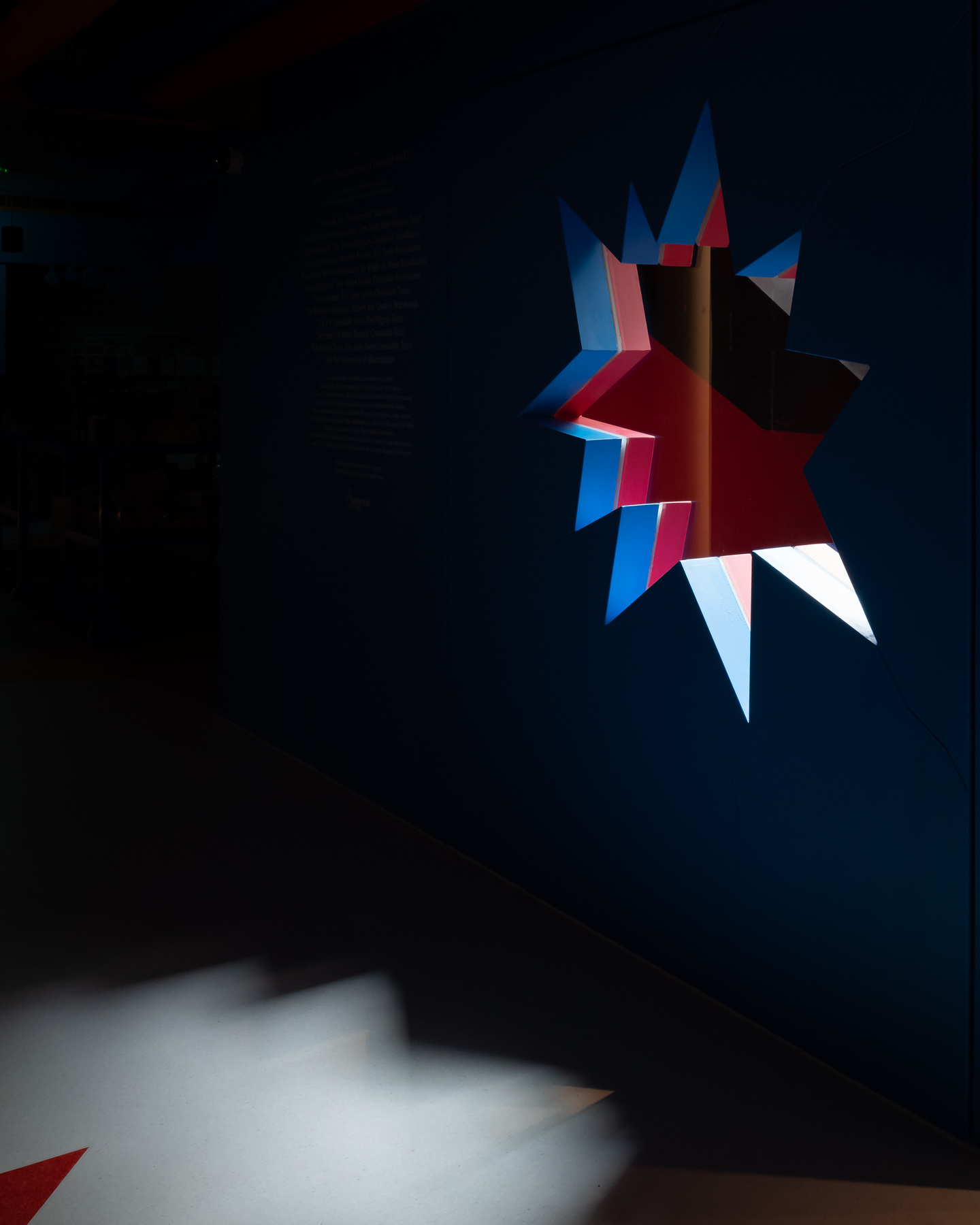 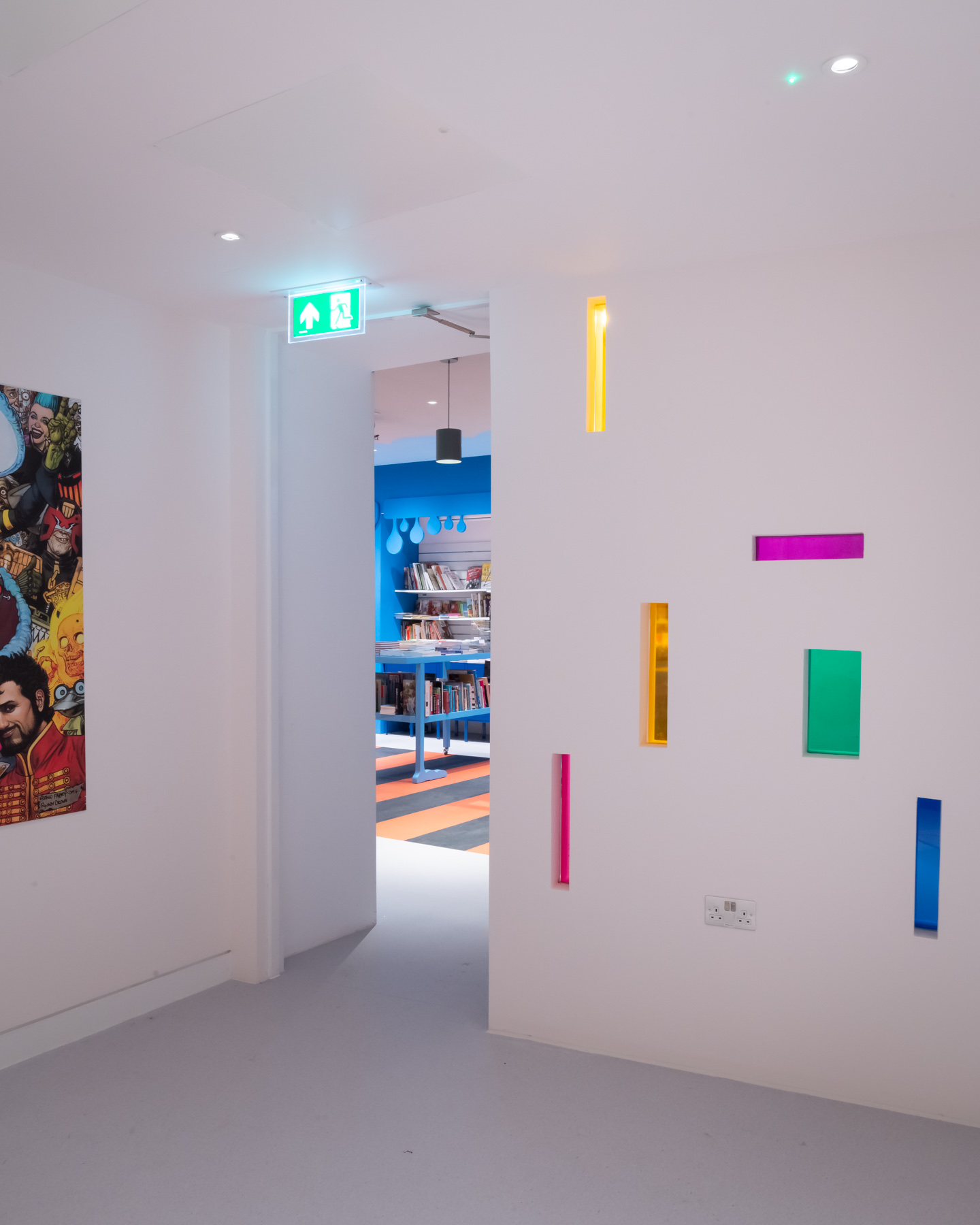 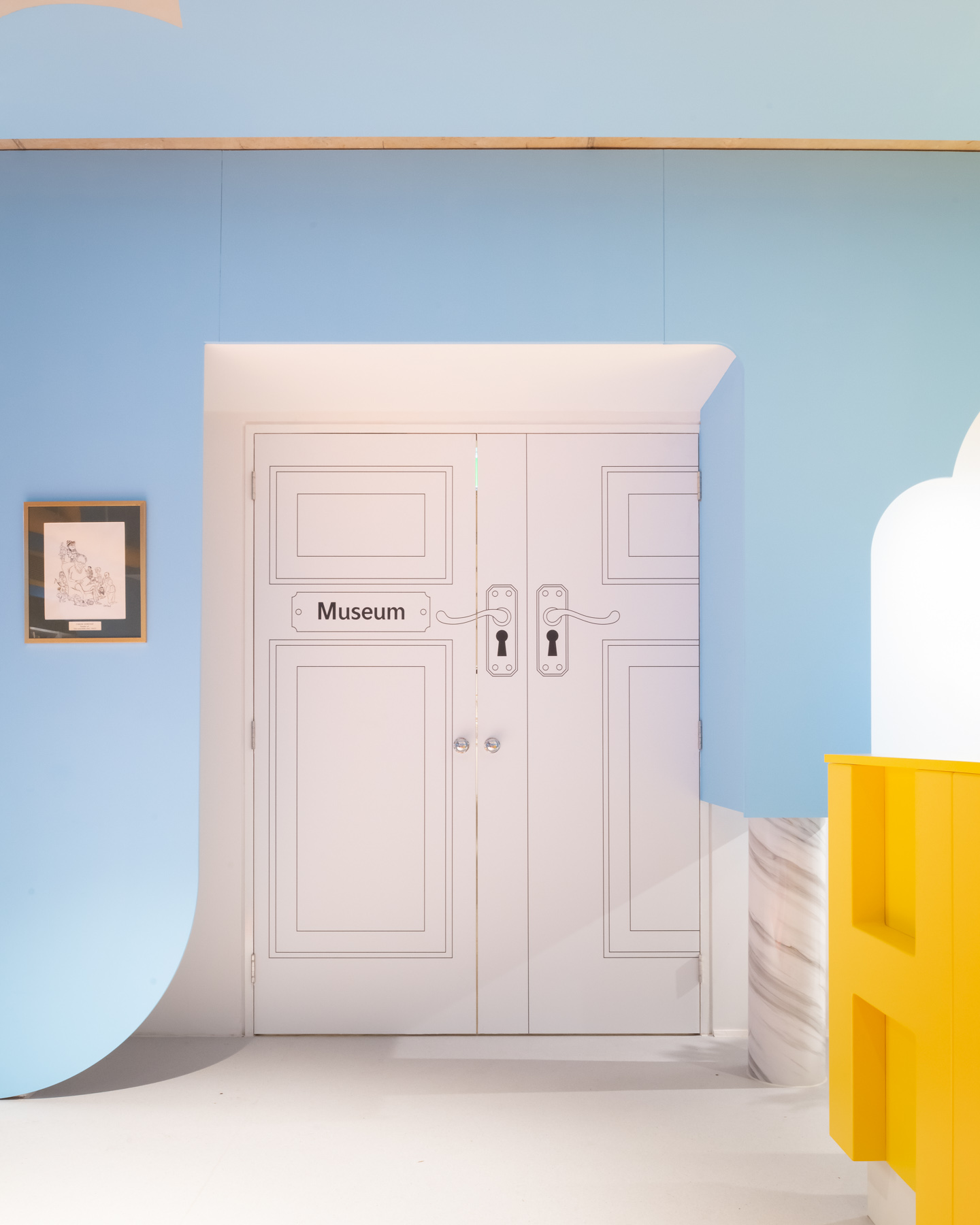 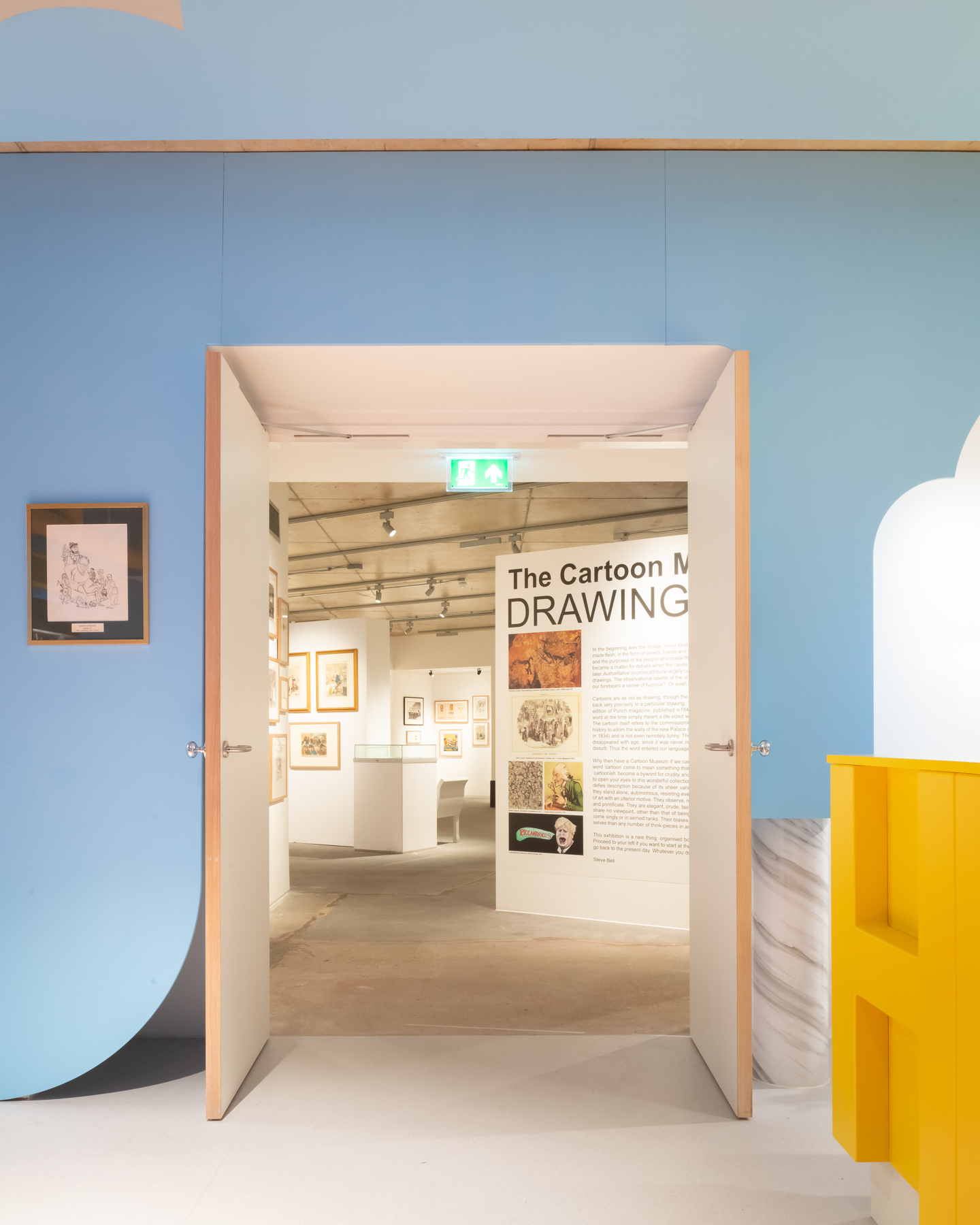 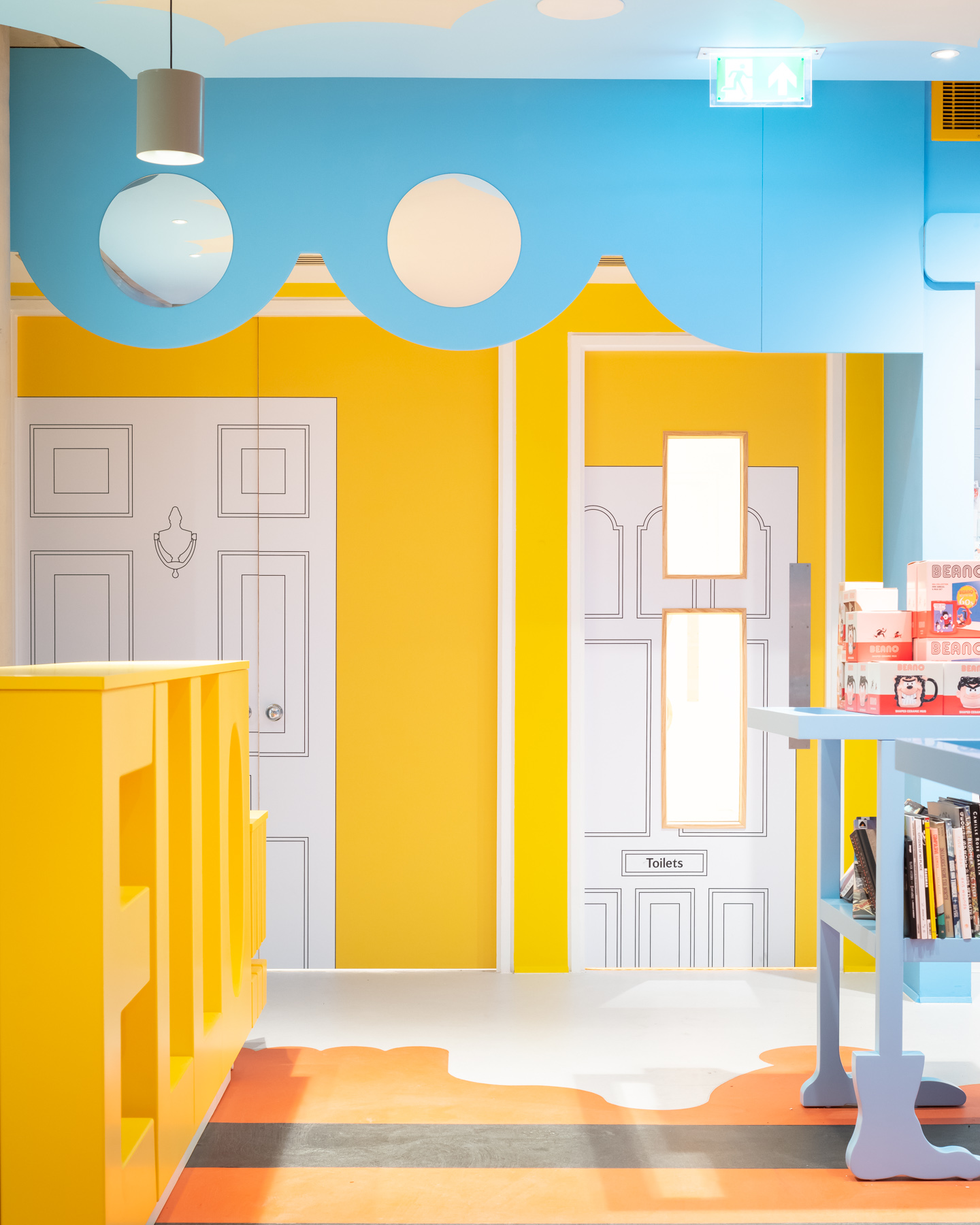 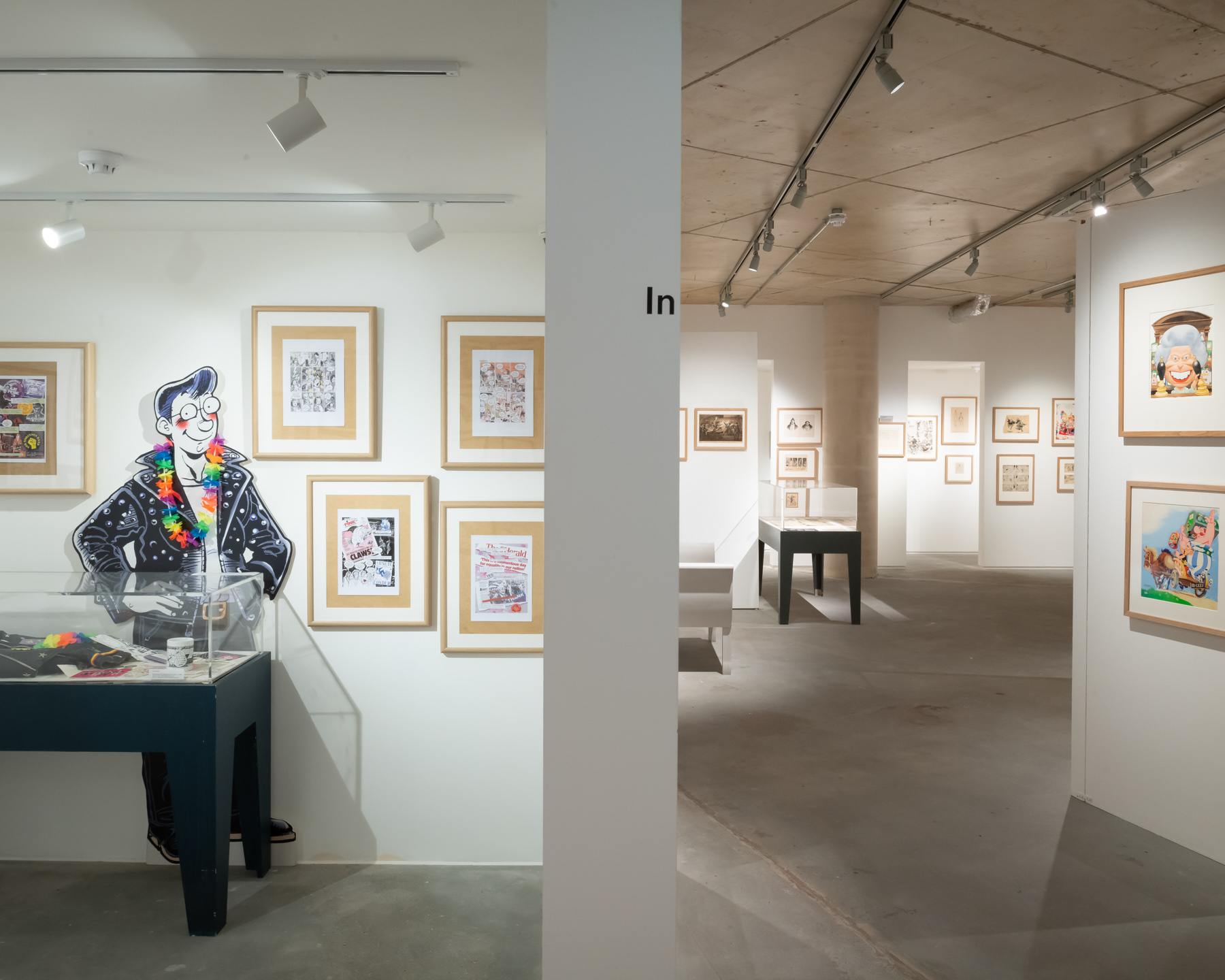 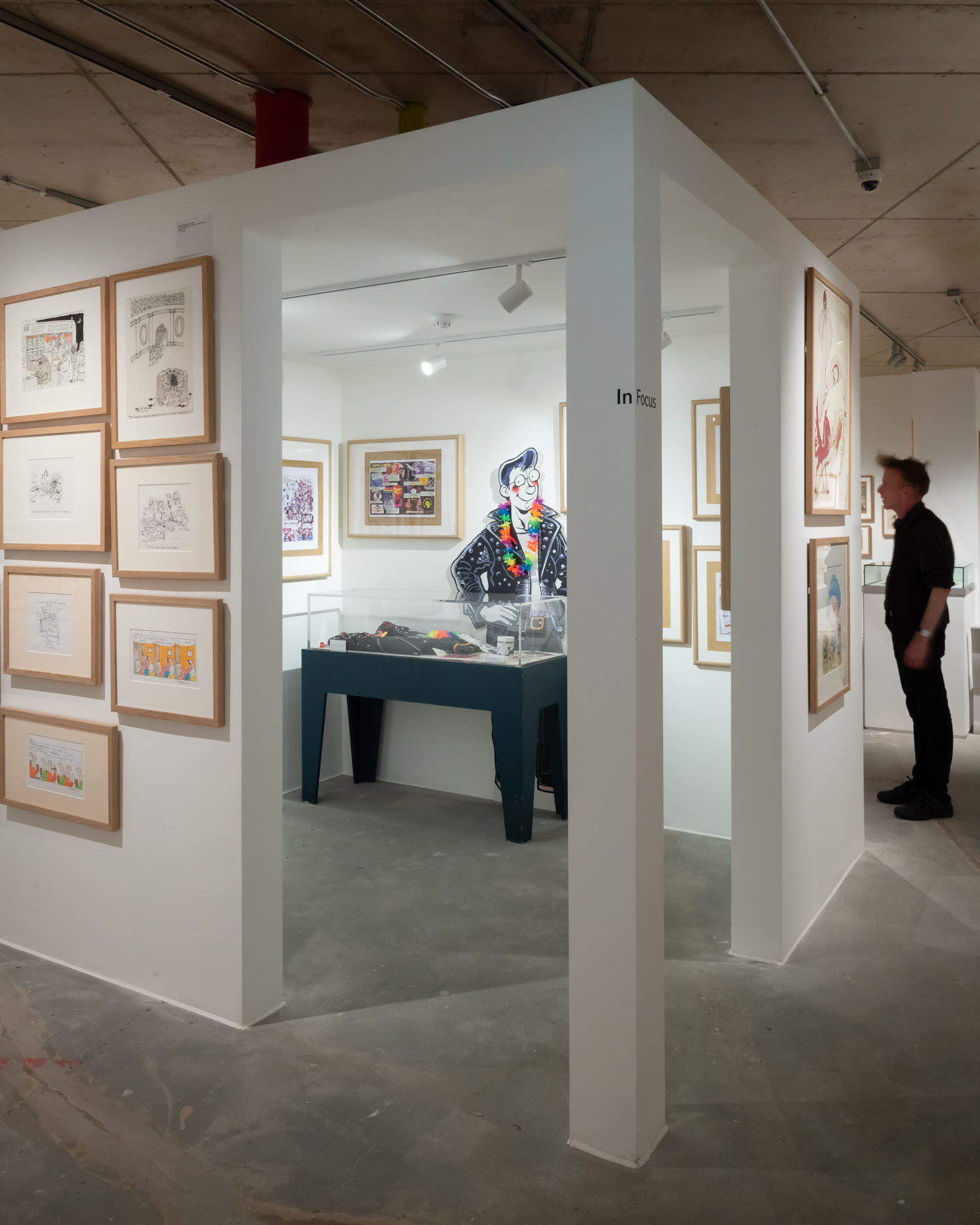 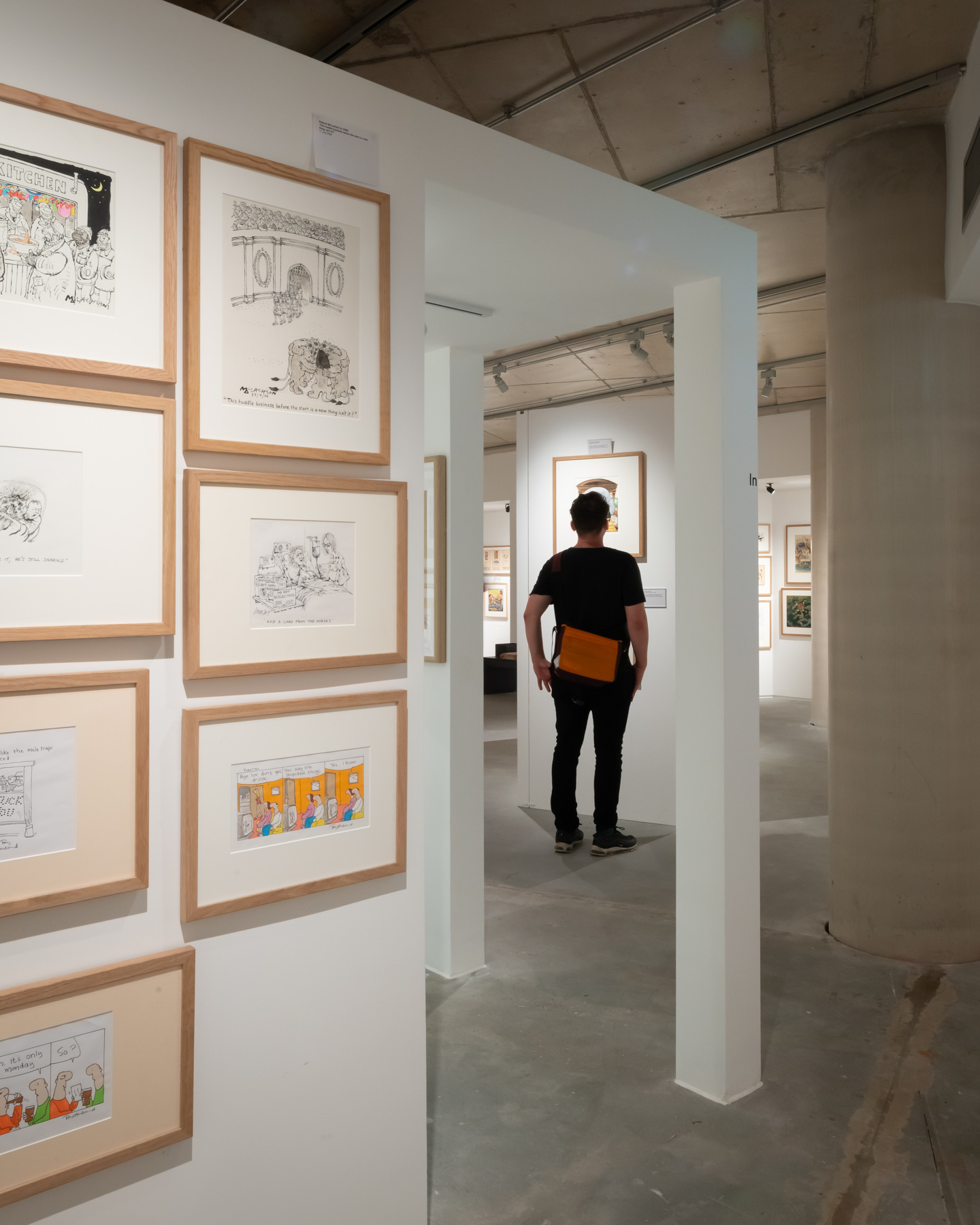 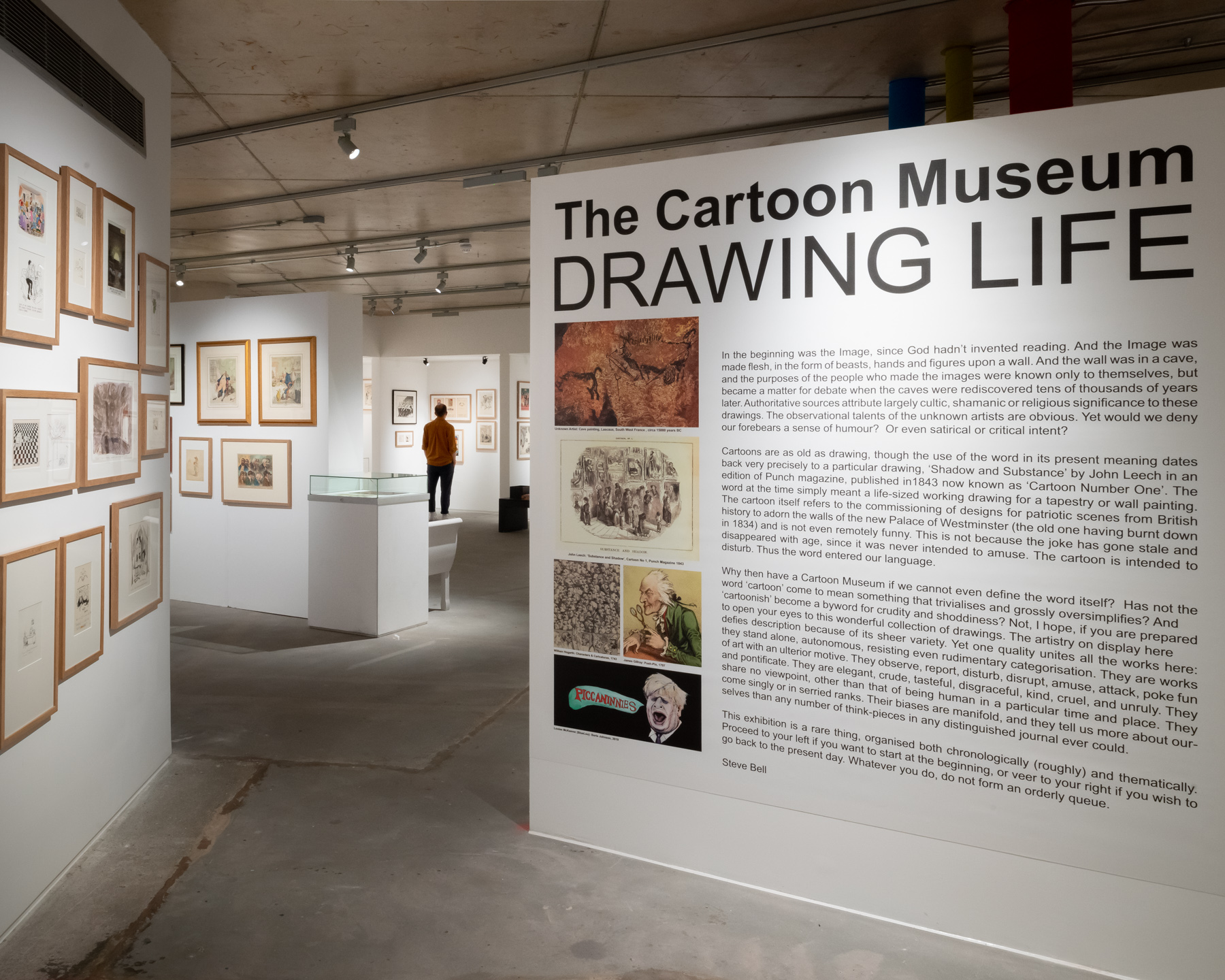 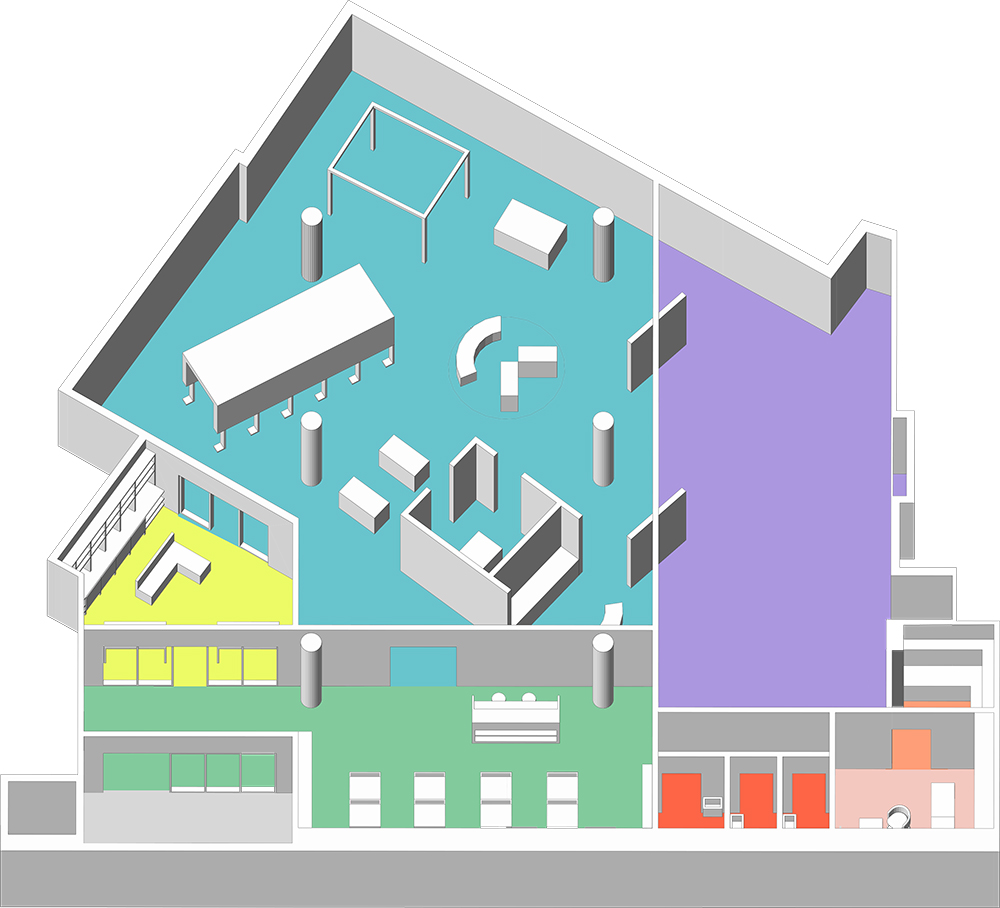 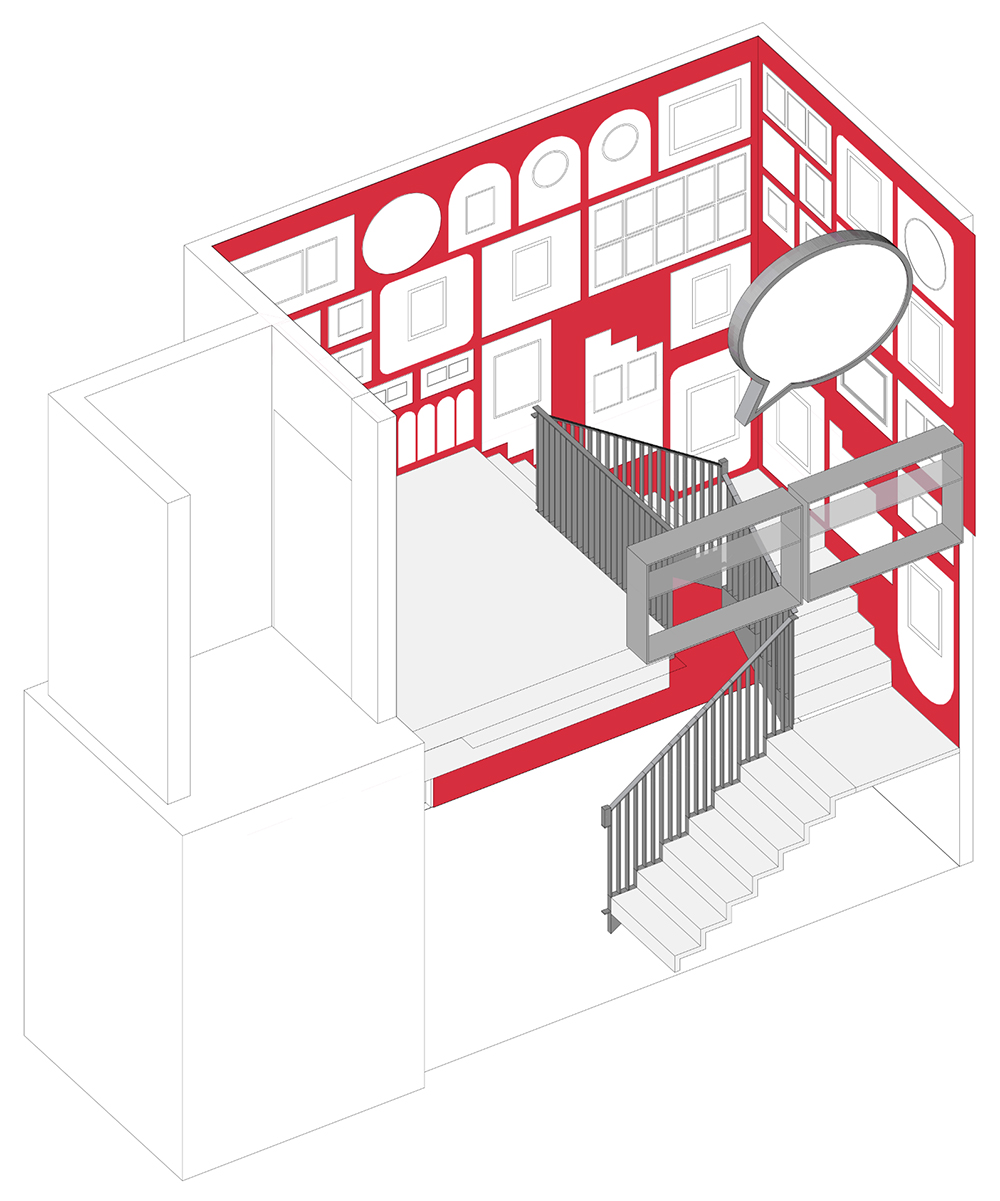 Sam Jacob Studio has completed the new £2M home for the Cartoon Museum. The move to the new site on Wells Street is pivotal giving the museum a permanent home for the next 25 years in Fitzrovia. The flexible and accessible new space includes two main gallery areas – one for the Museums permanent collection, and another for changing special exhibitions, a new Clore Learning Studio, and destination shop as well as offices and archive space.

The design approach turns the graphic world of cartoons into a three dimensional space full of humour and delight. Just as in cartoons, physical things don’t behave as one might expect.

From the neon speech bubble sign that announces the museum to the street, a picture gallery red stairwell frames a display of iconic cartoons characters from over a century, This leads visitors down from street level, part reminiscent of a staircase hung with portraits in an aristocratic mansion, part strip cartoon.

The museum’s interior is first glimpsed through a smashed-shaped window punched through the wall. A 3D ‘explosion’ marks the visitors arrival, as if the architecture of the museum had been subjected impossible cartoon-like physics.

The shop announces itself with a counter made of giant letters greeting the visitor with a big ‘Hello’, like the text in a cartoon panel. An accessible counter height is formed with a string of smaller exclamation marks ‘!!!” (like everything in the world of cartoons, things are always exaggerated). This sits on an abstracted tiger  skin rug on the floor.

The space is bounded by a supergraphic wall treatments that suggest clouds, trees, even drips as if the space has just been painted into existence.

Doors that sometimes seem too big and other times too small provide entrances to the gallery spaces.

A fake bookcase with a secret door, familiar from many a villain’s lair, hides the Clore Learning Studio beyond.

Behind this playfulness, the design works hard to organise the space, providing both flexible gallery spaces and back of house facilities giving a clear logic and efficient use of space within the complex plan of the existing shell.

The spatial organisation is inspired by the frames of a cartoon strip, and the arrangement allows the museum to open up different routes, circuits and spatial narratives that can reflect different exhibitions and uses.

Founded by a group of cartoonists, collectors and enthusiasts in 2006, The Cartoon Museum preserves the best of British cartoons, caricatures, comics and animation.

The museum has opened with a display curated by Cartoon Museum Trustee and political cartoonist Steve Bell. This tells the story of the history of cartoon and comic art with superb examples from the museum’s 6,000 strong nationally important collection, and which features work by over 300 artists.

‘Moving to a permanent home just off Oxford Street is very exciting for The Cartoon Museum. With important collections of cartoons, caricatures and comics, the collection is an important part of Britains’s heritage. Sam Jacob’s unique design has created a vibrant, creative and fun museum space from scratch. It has always been our aim to send people out of the museum happier than when they came in. We look forward to continuing to animate the cultural landscape of London.”

Sam Jacob said “I’ve always been interested in the relationship between drawing and architecture, so to be able to explore ways in which graphic, 2D ideas can be translated into physical space and material things has been a joy.”